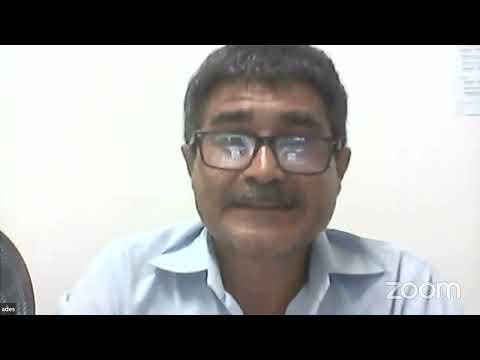 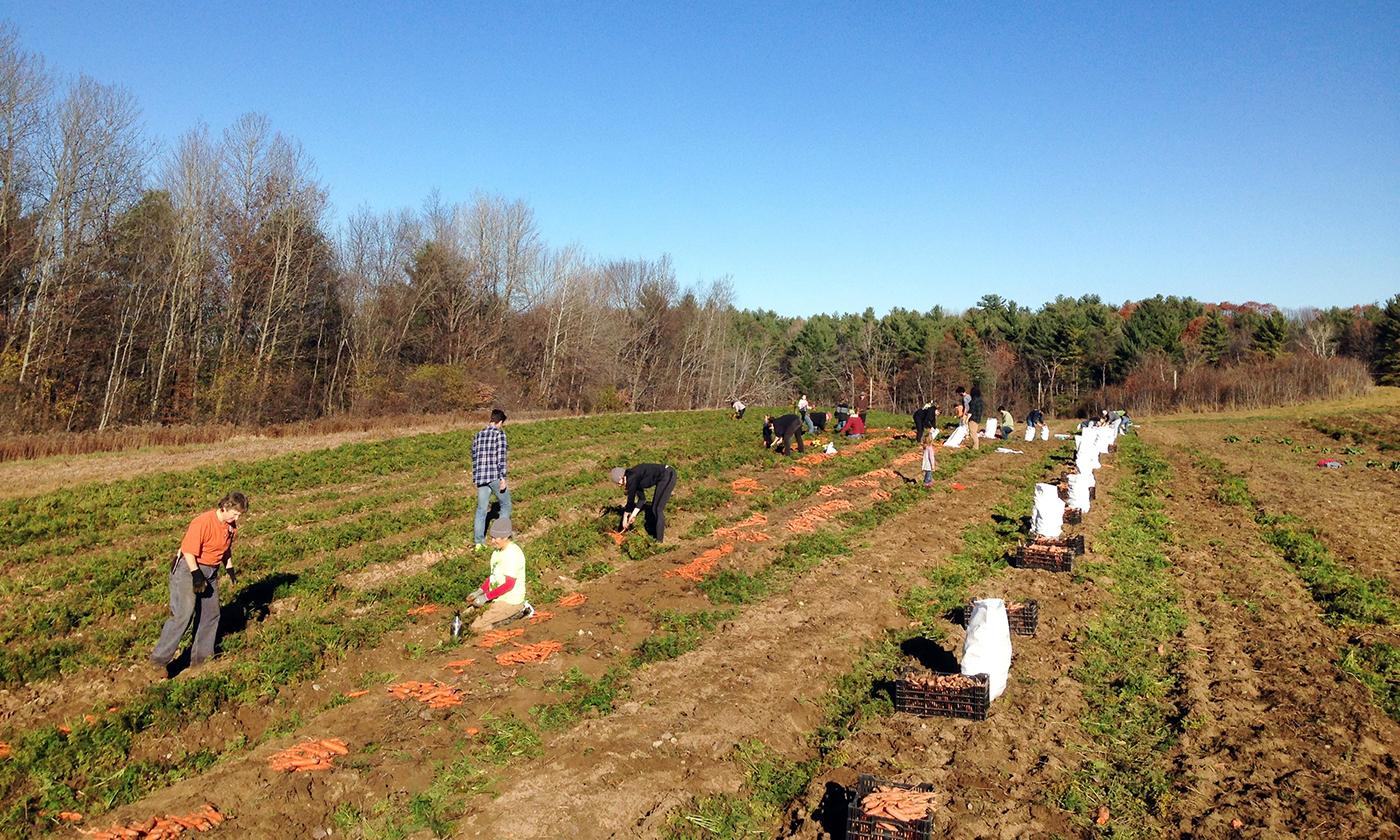 Each year, farmers like Joe Tisbert of Valley Dream Farm in Cambridge, Vermont, are challenged with finding an outlet for their surplus crop. Surplus crop is defined as the food remaining after a harvest that cannot be sold on the market, or which cannot be harvested. As a result, farmers make less revenue for the season, but it also poses a potential loss of food for people in their communities.

Farming is the genesis of our food supply, and it’s an industry that is wracked with labor shortages, weather impacts from climate change, food waste, price volatility, and unequal distribution of land.

In response to some of the challenges that some Vermont farmers face, one Vermont nonprofit organization, Salvation Farms, which is not a farm, is devising ways to work with farmers to manage their crop surplus and get it to people who need fresh produce.

Salvation Farms co-founders, Theresa Snow and Jen O’Donnell, piloted their model in 2004, which centered the agrarian practice called gleaning. Since ancient times, poor people or travelers would visit  local farmed fields, whose owners would leave small sections of their land to be harvested, or gleaned, by those with lesser means. Snow, who now sits as the executive director of Salvation Farms, learned about gleaning while she was serving in AmeriCorps in the early 2000s on a farm in rural Virginia. She grew up with parents who Snow described as “modest homesteaders” and with grandparents who owned a dairy farm, and she says her upbringing was very rooted in home and land-based economies and not “just a monetary commerce-based economy.” 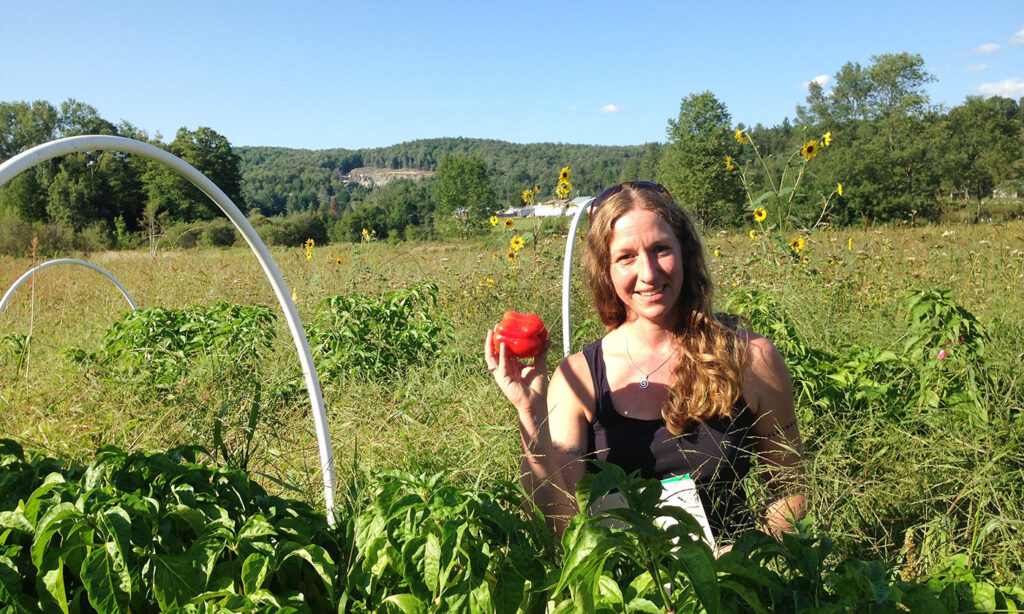 Theresa Snow learned about gleaning while she was serving in AmeriCorps in the early 2000s on a farm in rural Virginia.. Photo from Salvation Farms.

AmeriCorps later transferred Snow to New York City, where she was tasked with helping families and individuals who had lost their jobs, homes, and loved ones in and after the 9/11 attacks. There, Snow realized how far people were from meeting their basic subsistence needs.

“What I experienced providing service—essentially casework to individuals who are seeking support—was that these individuals had no ability to meet any of their essential needs because they had fully bought into a monetary economy,” said Snow.

Snow maintains this was not just an issue for people in metropolitan areas, but also in her home state of Vermont, where people could be just as removed from their food sources. After her time in AmeriCorps, Snow moved back to Vermont and returned to working on a farm. She struggled with what to do with her life and when asked by a farmer where she really wanted to put her energy, she said that she wanted to teach people about farming. On that farm, Pete’s Greens, she devised and tested the plan for Salvation Farms.

The United States has more than 2 million farms. According to the USDA, agriculture, food, and adjacent industries contribute $1.11 trillion to the U.S. economy. Of that amount, farming produces $136.1 billion. Snow, along with staff and volunteers at Salvation Farms, help farmers such as Tisbert find a place for their surplus food.

Valley Dream Farm sits on a 300-acre tract made up mostly of streams, pastures, and woods, with 10 to 15 acres reserved for growing food. Its main crops are potatoes, cucumbers, and kale, which are sold through three channels: its own farm stand, wholesale buyers such as groceries, and a cooperative, Deep Root Organic Cooperative, which sells farmers’ produce to other food cooperatives, CSAs, and some grocery chains like Whole Foods. 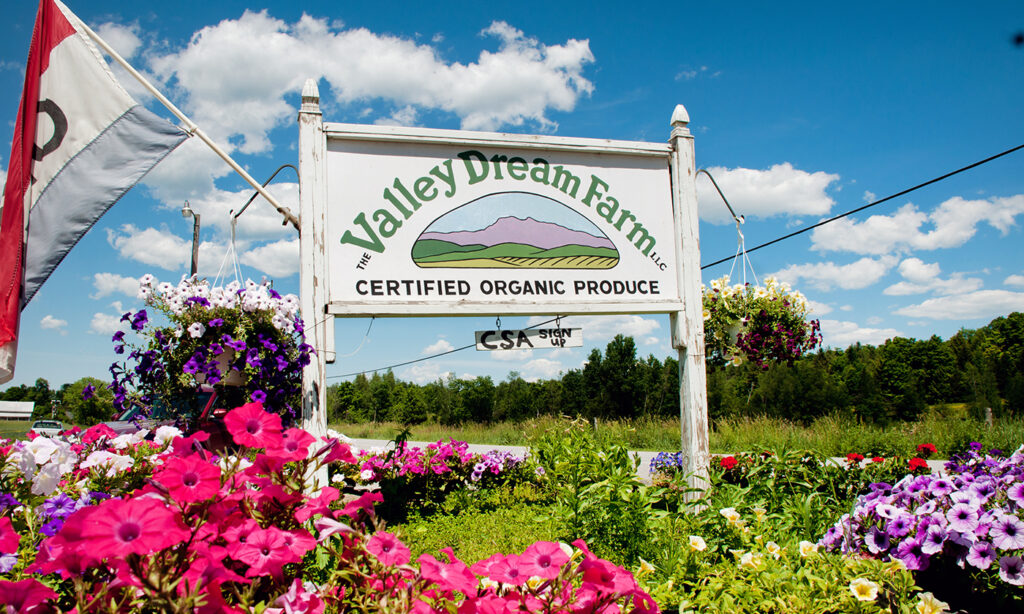 The sign at Valley Dream Farm in Cambridge, Vermont. Photo from Salvation Farms.

“It’s great to grow something and say, ‘Wow, I really like to grow this little one. I like to really grow this and sell it and try to make a living on it,’” Tisbert said. “Well, you’ve got to find a market. Everybody has to have a niche. People are trying to figure out where to go. How can I sell it?”

That’s where Salvation Farms comes in.

“When I can’t market the product, I have Salvation Farms,” said Tisbert, who has been working with the organization since 2006. “They show up, and I give them things that I can’t sell in a timely manner. I need to get it out the door because I need my space.”

Salvation Farms is part of the Vermont Gleaning Collective, which consists of a number of organizations that glean throughout the state.

For some farmers of color, such as Amber Arnold, gleaning is not something her farm uses now. Arnold, who identifies as Black and multiracial, has other considerations in establishing her farm’s practices.

Most farms in Vermont, and in the U.S., have White owners. As of 2017, White farmers owned nearly 93% of farmland in the United States, and accounted for about 97% of the market value of their products. Nevertheless, Black, Asian, Native American, and Native Hawaiian/Pacific Islander farmers still owned about 60 million acres combined, and farmers of Hispanic, Latino or Spanish origin, regardless of other racial identification, owned 32 million acres. Of the nearly 7,000 farms in the state of Vermont, only 13 are owned or operated by those of Asian descent, 17 by Black Vermonters, 23 by Native Americans, and 82 by people with more than one racial identity.

Arnold’s farm, Susu CommUnity Farm in Brattleboro, Vermont, was founded in October 2020 as a response to its community’s wants and needs around food access during the pandemic. Arnold and her co-founder, Naomi Moody, who identifies as AfroIndigenous, are in the process of purchasing 37 acres to grow and continue a free CSA program they devised called Boxes of Resilience. 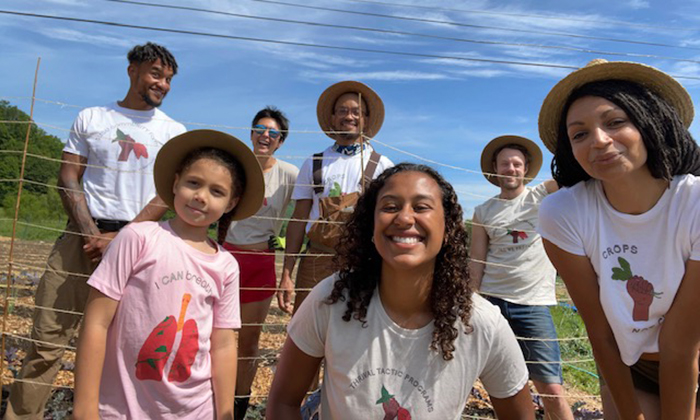 Arnold and Moody learned about gleaning through a funder and ultimately determined that the way Susu CommUnity Farm’s produce is harvested, and the way they want to work with whom they harvest or partner, has to be intentional and aligned with the founders’ values.

“All of the people who engage in our programs and stuff, we want to make sure that they have a racial analysis and that they want to connect in a very particular way,” Arnold said. “And so I think it’s not just about labor for us. There’s a whole communal collective piece that has to be present.”

Salvation Farms only gleans produce that will be used by the organizations and people it works with. The group works with 20 to 30 farms and 50 recipient sites, including food banks and other charitable food organizations like Meals on Wheels of Lamoille County, and Lamoille Community Food Share as a way to bring farm fresh produce to the food insecure. According to the USDA, the average food insecurity rate for Vermont households between 2017 and 2019 was 9.6% before the pandemic.

Meredith Niles, a researcher and professor of food systems at the University of Vermont, is part of a team that has conducted six studies on food insecurity in the state during the pandemic. In the first month of COVID-19, Niles and her colleagues surveyed 600 people about their food security before and after the onset of the pandemic in the U.S. in March 2020. The survey revealed a 33% increase in food insecurity among households during the COVID pandemic.

Food insecurity is not just defined by the lack of economic resources with which people can obtain food, but also whether or not people have the ability to travel to access food. Additional obstacles were presented by the pandemic when much public transportation was curtailed.

Niles believes that Vermont farmers, including a small number who identified as BIPOC, have the opportunity to act as a solution to this issue.

“We did see that there were a number of respondents—farmers—that wanted to in the future start accepting SNAP benefits post-COVID, for example,” she said. “So there’s a lot of opportunity to better connect these two things, especially in a state like Vermont where we have such a vibrant local farmer and food business sector, and also we have demonstrated a need for increasing food security.”

Food service programs such as Meals on Wheels of Lamoille County receive, on average, 100 pounds of local produce a week from the Salvation Farms gleaning program. During their eight-year relationship, Salvation Farms has learned what produce will serve the recipients of the Meals on Wheels program, many of whom are older Vermonters.

“They know what we need,” said Nicole Fournier Grisgraber, executive director of Meals on Wheels of Lamoille County. “They show up here every Monday and drop our delivery off.”

It’s important to note that the work of Salvation Farms is one strategy of collaborative ecosystem of food banks, food pantries, gleaning collectives, and farmers to feed those in Vermont who may lack sufficient access to food.

Snow believes that food that does not make it off the farm and into the community is food lost. In Snow’s eyes, food loss is different from food waste. Food waste is a product that has left the farm and gone into the food supply chain; waste can occur anywhere along that chain from storing, to shipping and distribution to consumers.

In the U.S., about 400 pounds of food per person is wasted annually, according to the National Resources Defense Council. An organization like Salvation Farms tries to intercept food before it leaves the farm to make sure that food has a clear endpoint. In the end, there is less food loss and potentially less food waste.

Snow also maintains, and Tisbert supports, that most farmers are not wasteful and that if they cannot sell a crop in the traditional market, they will find something to do with it, even if it’s tilling that harvest back into the land. Tisbert composts some his surplus on-site. For other farms, if no recipient for a donation can be found, or there is too much surplus crop, Salvation Farms will help give that food to an animal farmer or composting operation.

Tisbert said working with Salvation Farms has been helpful, “Farmers sometimes have crops that are second, that the Whole Foods of the world won’t take,” he said. “So, you’ve got to find something to do with it. And you don’t want to just throw it away. They have a great service to myself and a lot of other farmers that I know.”