Can Organic Farming Save the World? Yes. But Only Through a Transformation in U.S. Food & Farm Policy 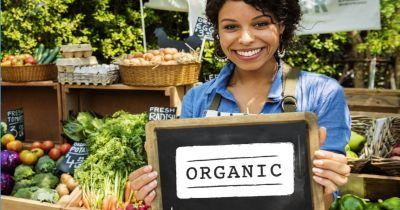 Organic farming is a win-win for people, animals and the planet. But it’s so much more than a set of practices used to grow food.

Organic agriculture takes a holistic approach that embraces Mother Nature—working with as opposed to against nature—to grow healthy, nutritious food while at the same time preserving earth’s natural ecosystems.

When done properly, organic farming is the way of the future. It’s a solution to some of the world’s greatest and most complex problems including climate change, food insecurity and the loss of biodiversity. It has the potential to both save us from climate catastrophe, and produce enough food to feed the world in a way that allows humans to live in harmony with nature.

The report also looks at the negative impacts of industrialized agriculture, and how organic agriculture can help offset these effects.

One of the SDGs mentioned in the report is Life on Land, a goal that aims to protect forests and stop land degradation. This goal is an important one. Global deforestation is occurring at an unprecedented rate. This leads to the loss of biodiversity. It also fuels global warming, as forests serve as major carbon sinks—and tearing tearing down forests releases CO2 into the atmosphere.

A recent report by the think tank Climate Focus revealed that an area of forest the size of the UK is being lost every year worldwide. Deforestation is largely driven by destructive farming practices. Take for example the Amazon fires, which were started by the clearing of land for agriculture—primarily soybean production and intensive cattle ranching.

Industrial agriculture and its extensive use of pesticides pollutes soil and water and is harmful to wildlife, including important pollinator insects, which are vital to wild plants and food crops. About 75 percent of crops used to feed humans are reliant on insect pollination.

Organic farming, on the other hand, has the opposite effect. Because it doesn’t use pesticides or synthetic fertilizers, and instead relies on a diversity of crops and beneficial insects, organic agriculture enhances biodiversity and soil organic matter. This is key as 25 percent of biodiversity is found in the soil, according to the UN’s Food and Agriculture Organization (FAO).. Organic agriculture is thus an important tool in achieving the UN’s Life on Land SDG.

Organic agriculture is also essential in helping to meet the UN’s SDG on Climate Action.

Industrial agriculture and its chemical pesticides require vast amounts of fossil fuels. In addition to contributing to CO2 emissions, agrochemicals also degrade the soil, depriving it of the key micronutrients needed to grow healthy food and sequester carbon.

Organic agriculture is a solution to the climate action goal for two reasons. For one, it doesn’t rely on fossil fuel-intensive pesticides. Secondly, studies show that organic farms have 30 percent more plant and animal species than non-organic farms. This leads to healthier, nutrient-rich soil that can sequester vast amounts of carbon from the atmosphere. This is crucial as soil contains more carbon than the atmosphere and terrestrial vegetation combined.

Can organic farming save the world?

Organic agriculture is a multi-faceted approach to food production that has the ability to reverse the negative environmental and social impacts of industrial agriculture.

So, can it save the world? Yes. But only through a major transformation in U.S. food and farming policy.

That means no more subsidizing chemical-dependent agriculture, GMOs or factory farming. It means supporting initiatives such as the U.S. Farmers & Ranchers for a Green New Deal, a national coalition that supports policy reforms for farmers and ranchers whose practices:

Are you a farmer or rancher? Or a farmer- or rancher-member organization? Would you like to see Congress pass better food and farming legislation? Legislation that supports you in your efforts to manage your land using practices that improve soil health, contribute to clean water, and produce healthy food? Sign this letter to Congress!

Not a farmer? Consumers can support a Green New Deal that radically transforms U.S. food and farming policy, too. Sign the petition here.

Julie Wilson is communications associate for the Organic Consumers Association (OCA). To keep up with OCA news and alerts, sign up for our newsletter.