The Controversy of the 41 Trees 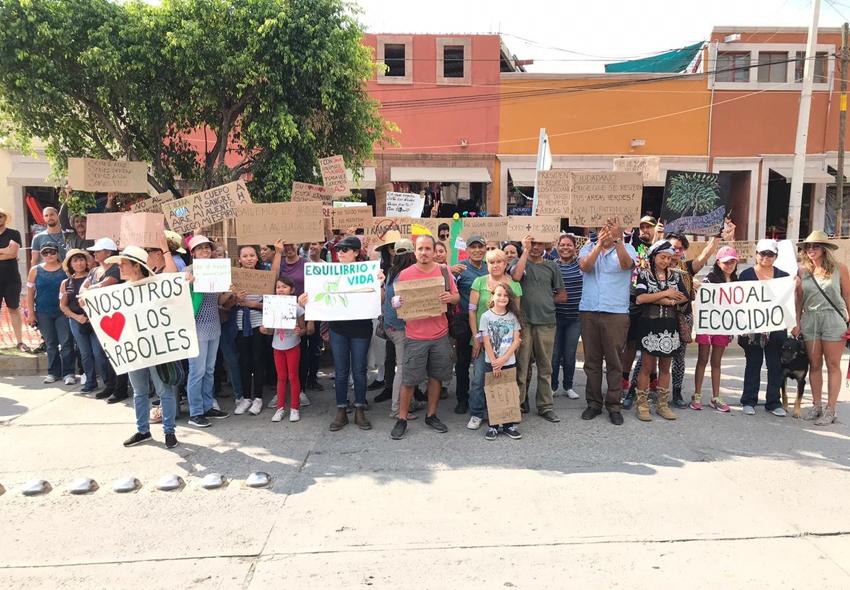 "There is a magical machine that absorbs carbon from the air, costs very little and builds itself. It's called a tree."

On Friday, September 20 members of the "Climate Action group of SMA" march to Parque juarez and held a rally. This was a part of a worldwide movement, "Fridays For Future" called by Greta Thunberg, the sixteen year old who has catapulted to the front of the environmental movement. The local event "Climate Action for the Future" was a joint project of several local organizations. It presented the problems associated with global warming and explored solutions.

That same day another environmental movement was born here in San Miguel. The "Save 41 Trees" movement reported that the next day, when the renovation work on Avenida Guadalupe would be inaugurated, the 41 trees in the median strip would be removed. Save 41 Trees put out an invitation to all concerned persons to avoid this ecocide. One thing opposed the other. The world movement to reverse the effects of climate change is very pro-tree, while, our Municipal and State governments' public works road improvement plan calls for the elimination of trees, the very trees that are cleaning our urban air.

Aware of the growing citizen opposition, the City suggested that the trees would be transplanted.

On the next day, Saturday, before the road work was begun the possibility of transplanting the trees was explored. Agronomist Arturo Morales explained to the cameras, several points about a what is needed for the healthy transplanting for this type of trees, most more than 20 years old. He advised that the best season to transplant them would be at the end of winter. Then the tree is most quiet, it is "wintering" and therefore has a better chance of surviving the process. Special machinery is needed to extract the entire root system with its surrounding soil. Then, their new home should be ready to recieve them. The place should be prepared so that they are out of the ground for the shortest possible time to avoid root stress. Arturo Morales made it clear if the City goes ahead with the transplant now, then the trees would not survive. The road work was then inaugurated with a brief speech by Municipal President Luis Alberto Villarreal. Also in attendance were more than a dozen activists requesting respect for the trees.

This reporter, the editor of Lokkal's Community Section, directly and repeatedly questioned President Villarreal about where the trees would be transplanted. She did not receive any answer, but was dismissed for not being born in San Miguel. She believes that members of the municipal government had no answer to give.

After the mayor's refusal the controversy, protest and true fate of the trees has publicized on various social media. Save 41 Trees summoned citizens to form surveillance brigades to prevent the trees from being removed. There was and continues to be a very favorable response to this call. Victoria Delgado is the main leader of Save 41 Trees. She declares that she is not against the government's initiative for improvements and development of Avenida Guadalupe. However, she is against that that improvement should come at the expense of nature. A solution is being sought in a legal and transparent way to integrate trees into the project and a positive response from the government is expected.

Day and night throughout the week the community's support been extremely positive. Many children have come to the place with drawings and posters, asking not to remove the trees. Students from nearby schools, citizens of different SMA colonies and even from rural communities, gathered at the site, lend their support and to sign the petition to not transplant. Neighbors who planted and looked after the trees for more than 20 years also joined the brigades. One of them is Doña Mary, an elderly woman who with tears in her eyes said, "I take care of these trees as if they were my children and now they want to remove them?" Likewise, representatives of the Center for Global Justice and Educación Colaborativa among other civil organizations, answered the call, supporting the cause. Some surrounding merchants supported volunteers with water and food. Now the people are placing colored ribbons with written messages in the trees, prayers and positive thoughts to raise awareness in the hearts of members of the municipal government. You are invited to come with your whole family and support this noble cause. Bob Stone of Center for Global Justice with our reporter, center

Dear reader, the conclusion of this matter is still up in the air. At stake is not only the life of trees, but our health. By cutting down trees, we eliminate the main filter we have of carbon dioxide, the main pollutant that causes global warming.

We invite you to defend our oxygen and make our city an example at an international level in actions against climate change.

Please follow the link below to sign the petition to conserve these trees, so important to our society.
www.chng.it/ytdL6gTv

Go to the support brigades 24 hours a day.

Save 41 Trees thanks you and the various organizations in San Miguel de Allende for their support.

There is something more powerful than language and destruction.
It is the stillness that observes,
patient and undaunted,
integrating hatred and resentment
to transform it into something new,
an action
a new word.

What is this but the definition of "tree"?

Through its roots it absorbs water,
sometimes poor and polluted.
And through its leaves
the air
polluted too
with our wandering mobility
and our unbridled ambition.

And yet there it is.
It grows.
It expands.
Yes, it gives us
to all equally,
oxygen and new life.

Let's save all the trees in San Miguel de Allende.
And add to that the planting of new trees that encourages the government to make this the greenest municipality.