In response to the lawsuits filed in 2019 by El Observatorio Ciudadano de los Sanmiguelenses AC and El Charco del Ingenio AC before the State Administrative Justice Tribunal, requesting that the integrity of the El Charco del Ingenio Ecological Preservation Zone and surrounding areas (ZPE) be maintained, 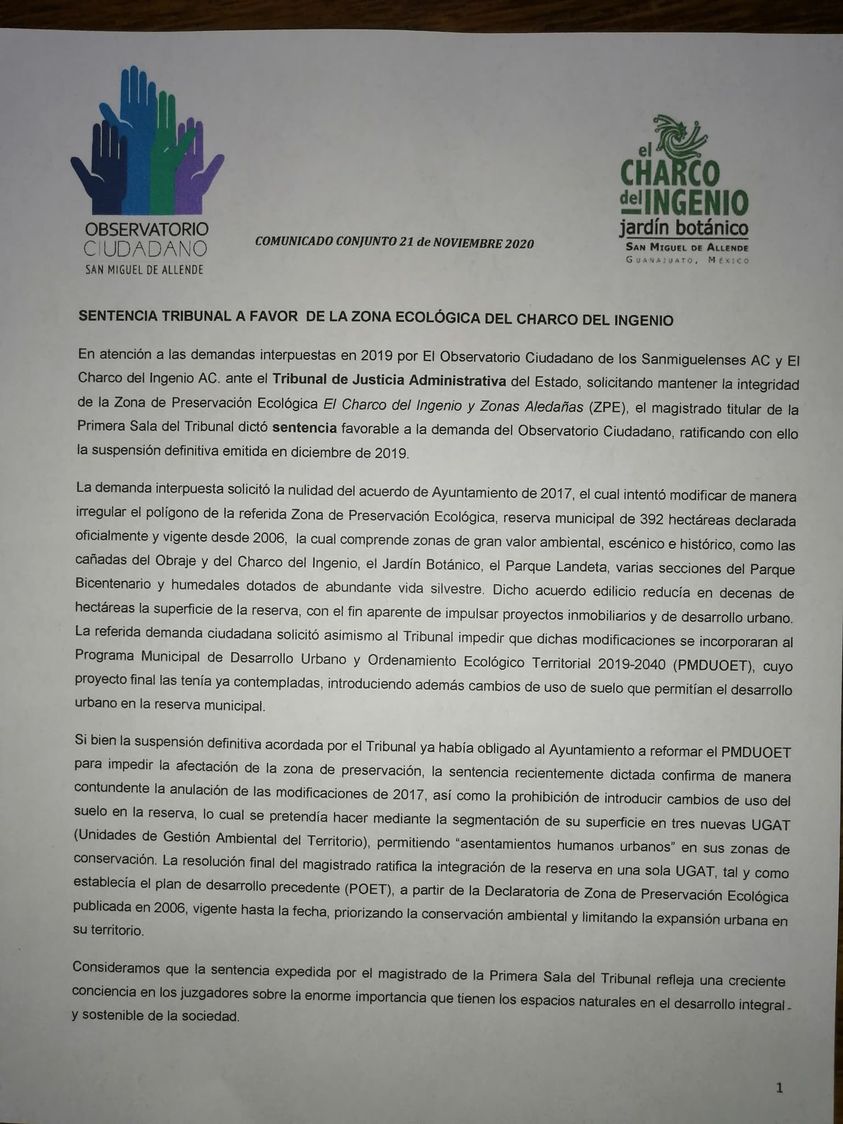 the judge in charge of the First Chamber of the Tribunal issued a favorable ruling on the Citizen Observatory's lawsuit, thus ratifying the definitive suspension issued in December 2019.

The lawsuit filed requested the nullification of the 2017 City Hall agreement, which attempted to irregularly modify the polygon of the referred Ecological Preservation Zone, an officially declared municipal reserve of 392 hectares in force since 2006, which includes areas of great environmental, scenic and historical value, such as the Obraje and Charco del Ingenio ravines, the Botanical Garden, Parque Landeta, several sections of Parque Bicentenario and wetlands with abundant wildlife. This building agreement reduced the area of the reserve by dozens of hectares, with the apparent purpose of promoting real estate and urban development projects.

The aforementioned citizen demand also asked the Court to prevent these modifications from being incorporated into the Municipal Program for Urban Development and Territorial Ecological Ordering 2019-2040 (PMDUOET), whose final project had already contemplated them, also introducing changes in land use that allowed urban development in the municipal reserve.

Although the definitive suspension agreed upon by the Court had already forced the City Council to reform the PMDUOET to prevent the preservation area from being affected, the recently issued ruling strongly confirms the annulment of the 2017 modifications, as well as the prohibition to introduce land use changes in the reserve, which was intended to be done by segmenting its surface area into three new UGATs (Territorial Environmental Management Units), allowing "urban human settlements" in its conservation areas.

The magistrate's final resolution ratifies the integration of the reserve into a single UGAT, as established in the previous development plan (POET), based on the Ecological Preservation Zone Declaration published in 2006, in effect to date, prioritizing environmental conservation and limiting urban expansion in its territory.

We consider that the sentence issued by the judge of the First Chamber of the Court reflects a growing awareness in the judges about the enormous importance of natural spaces in the integral and sustainable development of society.