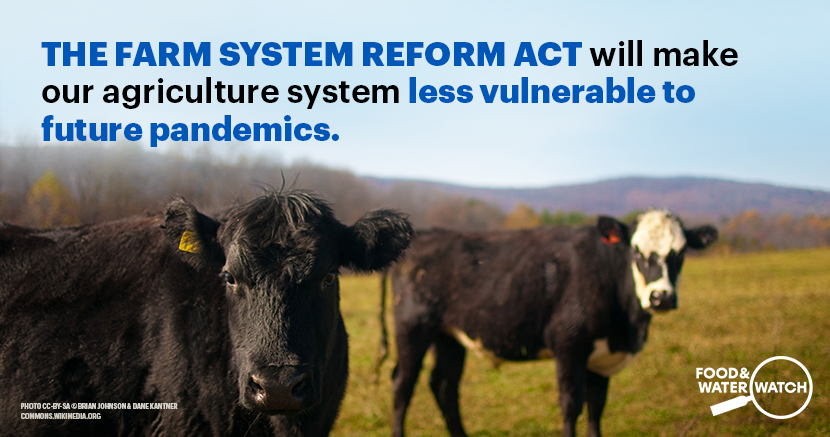 When a crisis hits, Americans need a food system that's resilient enough to withstand the storm. Here's how banning factory farms can help make that happen.

My great grandparents once owned the only grocery store in their tiny, western North Dakota town, where they sold ground beef and roasts from cattle they purchased and processed locally. The store stood for generations, until a Super Walmart opened up in Williston twenty miles away. Similar stories could be told all across rural America, where once thriving rural communities with diverse agricultural systems now struggle to survive, with the shuttering of the local grocery store the final death knell.

Agribusiness giants claim that the current food system—characterized by industrial practices and rampant consolidation—is necessary to feed the world. But the coronavirus pandemic is disproving this narrative; major supermarkets are struggling to meet the demand for staples like meat and milk, not due to food shortages but rather the disruption of supply chains. As experts have long warned, the highly consolidated, industrial food system is in fact less resilient than the regional, diversified systems it replaced.  We need smaller, more diverse crop-and-livestock systems and regional food hubs—and a new bill in Congress, the Farm System Reform Act (FSRA), provides the roadmap forward.

First and foremost, we need an immediate ban on new factory farms—where large numbers of cattle, pigs and poultry are housed in cramped conditions—as well as the expansion of existing ones. The list of environmental and public health impacts from factory farms is vast: polluted air and water, climate-warming emissions, development of antibiotic resistance in bacteria, and outbreaks of foodborne illnesses.

Factory farms also dismantle the economic and social fabric of rural communities, and are linked to higher levels of unemployment and outmigration, and a decline in community services. Rural communities cannot hope to rebuild vital services such as grocery stores and hospitals when revenue is being funneled out of town and into the pockets of agribusiness giants. Banning factory farms will halt the takeover of rural America by Big Ag and give smaller farms a fighting chance to survive in an already struggling farm economy.

The bill would set a deadline of 2040 for the phase-out of existing factory farms while providing funds to help farmers transition out of the factory farm model. Growers currently engaged in factory farming would have access to funds to help pay off debt (a significant hurdle for growers wishing to exit contract growing) or transition to more sustainable farming systems, such as organic crops or pasture-based livestock.

Notably, the FRSA would only offer this funding to farmers for projects on their own land—rather than flowing to the agribusiness giants who have long profited off the backs of their growers. We don’t need more handouts to JBS and other meatpacking giants.

The FSRA would hold integrating companies responsible for their manure waste

Factory farms produce enormous amounts of manure—an estimated 885 billion pounds each year in the U.S. Many operations lack cropland and produce more manure than can be sustainably applied to surrounding cropland, creating runoff that pollutes soil and water.

Integrated companies like Tyson and Perdue have long pawned off the enormous burden of waste disposal onto their contract growers. The FSRA would hold these integrators liable to both growers and surrounding communities for factory farm manure and other pollution, along with the negative health impacts associated with factory farms.

The FSRA levels the playing field between livestock growers and meatpackers

Finally, the bill would provide long-overdue improvements to the Packers & Stockyards Act (P&SA), which is supposed to address unfair practices within the meatpacking industry. Sadly, the industry is even more consolidated than it was when the P&SA was passed a century ago. For example, the top four meatpacking firms today slaughter 80% of beef cattle in the U.S.

These meatpacking giants are profiting off of rising demand for meat during the pandemic while continuing to gouge farmers. Strengthening the P&SA will help the United States Department of Agriculture (USDA) take enforcement action against meatpackers engaged in practices that distort the market and manipulate the price of meat, as well as unfair and deceptive practices by poultry integrator companies against their contract growers.

It is time to end the stranglehold that meatpacking giants have on the meat and poultry industry. Addressing these issues can help ensure fair prices and wages for growers as well as level the playing field for smaller slaughterhouses and meatpackers.

Smaller, local farms have stepped up to meet our food needs during the COVID-19 crisis

The vision outlined in the Farm System Reform Act is not an unreachable utopia, but it will require investment in smaller-scale operations and regional food hubs that are the lifeblood of rural communities. In fact, as global supply chains are interrupted due to the COVID-19 pandemic, smaller farms have helped meet needs in their local communities. Some that traditionally sold in farmers markets or to local restaurants quickly pivoted to community supported agriculture (CSA)-style deliveries so that customers can safely access their products. And farmers are finding innovative ways to reach new customers, including online platforms.

But many more small- and medium family-scale farms are struggling to keep afloat under the additional stress created by the pandemic, and it’s unclear whether stimulus funds earmarked for agriculture will support smaller farmers rather than factory farms. As lawmakers eye further pandemic relief aimed at our national infrastructure, let’s remember that family farms are among the most important infrastructure we have.

Throughout this crisis and beyond, we will continue to mobilize support for common-sense federal legislation like the Farm System Reform Act that would have made our food system less vulnerable during this pandemic, and that supports people like my great grandparents who worked hard to keep their diverse, local agriculture alive. This pandemic has made it clear that our work to protect our food supply has never been more critical and that we need the Farm System Reform Act now more than ever. Otherwise, we risk even further takeover by factory farms, increased consolidation in our food system—and more bleeding of rural communities.

Will you ask your lawmakers to support the Farm System Reform Act today?