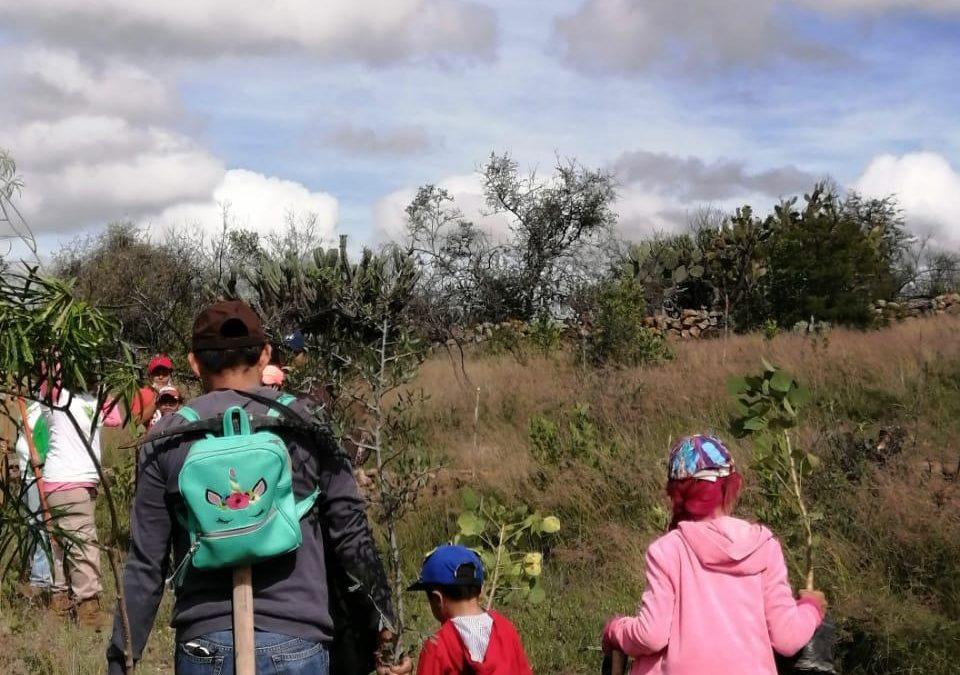 In the epicenter of a watershed that has been overexploited to the maximum despite the warnings and exhaustive work of environmental groups such as CEDESA, El Charco del Ingenio, Conservation Corps, Caminos de Agua, Vía Orgánica, El Maíz más Pequeño, not to mention Salvemos el Rio Laja, with more than 20 years restoring soils, reforesting and carrying out actions to control erosion, the Cuenca Sana-Comunidad Sana project emerges as a green flag of hope. This project links health, economy, sustained and sustainable production strategies as well as survival strategies in the face of climate change.

Although climate change "has reached us," those responsible for this project trust that we still have time to make adjustments. The Cuenca Sana-Comunidad Sana scheme is proposed as a transition strategy. According to the UN, humanity has ten years to achieve this transition. Others, more fatalistic, think there are five. What is clear is that the great congresses on climate change pale before the accelerated advance of the unpredictable. The planet is already another. It has passed all the mathematical calculation and forecasting models. “No more meetings, no more chairs, no more theories. Now is the time to act on the path,” categorically warns Jalil Aragón, socio-environmental promoter, one of those responsible for Cuenca Sana-Comunidad Sana.

Climate change has been manifesting itself in increasingly prolonged periods of drought and extreme rains. "This has a direct impact on soils," explains Agustín Madrigal, director of Salvemos el Río Laja and also responsible for the project. In addition, and as a result of the health contingency, the soil-food-health-economy relationship has become a red light. “We are addressing this issue and opening the eyes of a population that is part of this collective crisis. We have to act accordingly."

The pragmatic philosophy behind Cuenca Sana-Comunidad Sana clearly tells us that in the face of climate change, domestic and massive agricultural production will not be able to sustain itself as it has been doing. Although with the pandemic the impact of the "human footprint" in natural spaces decreased, Agustín warns that when "everything returns to the supposed normality, the reaction will be more fierce." Everything we stop doing will have to be resumed but "in a more violent way." Hence, proposals such as Cuenca Sana-Comunidad Sana are a good opportunity to rethink and contextualize health, production and economic problems as adaptation to climate change. And together with climate change, a change of mentality is also urgent. This is as crucial as the fertile soil for sowing the seeds of transformation.

“We knew about this problem and we ignored it,” laments Agustín. “We were too comfortable. We lost soil and crops and still we did not pay attention. There is already extreme damage but I do think it can be reversed. How? Harvesting in some plots that were abandoned. That is still possible.” It is also possible to sanitize trees, clear huts, build fences to control livestock, and allow native plants to grow in the mountains that are affected by livestock. However, the big task also falls to governments and state companies. Without their participation "we will not be able to have the deep interaction that is required."

A healthy watershed is advancing and has already left its mark on the Agustín González ejido, Las Tinajas estate, in the municipality of San Miguel de Allende. There, soil and water conservation and restoration actions were carried out to reestablish the natural conditions of the habitats that represent spaces for the development of wildlife, including both local and migratory birds. The 70-hectare property is of particular biological importance, which is why more than 7 thousand varieties were planted, including shrub, tree, maguey and teaspoon plants. All this was achieved through an environmental diagnosis and monitoring of the ecosystem conditions. It is an example of climate change adaptation measures through participatory work with the community that decides which area to restore. Trust between field technicians and ejidatarios allows work of this nature.

Among the regenerative actions, stone barriers were installed —in areas devoid of vegetation— to retain soil and reduce the speed of runoff. Trench ditches were implemented to retain rainwater and create a network to capture runoff. Stone dams were installed that allow infiltration, retention of moisture and soil. This contains the water for a longer time so that there are small troughs for the community's wildlife, birds and livestock. Likewise, carcabas containment works were carried out to prevent erosion. These help slow down of water runoff and prevent the formation of new gullies that are formed by overgrazing and trails created by animals and vehicles.

Everything that infiltrates the soil fulfills a function: it becomes grass and vegetation with many varieties of species. The trenches become planters with various types of flora. The absorption of water also creates the presence of organisms benefiting the ecosystem, fauna and the density of local and migratory birds.

According to the organizers of Cuenca Sana-Comunidad Sana there is a very good disposition on the part of the inhabitants. They are convinced that the restored space not only serves as a strategy for adaptation to climate change but also for birdwatching within low-impact tourism. Promoting this in other communities is the goal.

How does the community benefit in economic terms? "There is a fair payment for doing this job," says Agustín. “As it is an ejido land and the acceptance of the project passes through the assembly, those who made a living from tourism are now here due to the health contingency. The municipality's Environment and Ecology Directorate supports the community to be rewarded when it commits to environmental issues. They become aware of what they have."

Information is power and these works empower. Here you learn what education does not offer in schools. For Jalil Aragón, "it is important that the people of the cities know what is happening in these rural areas." To which Agustín adds: “It is not only about restoring and conserving, but also about appreciating that the communities also maintain traditions, the milpa is maintained and that must be respected. Valuing is conserving."