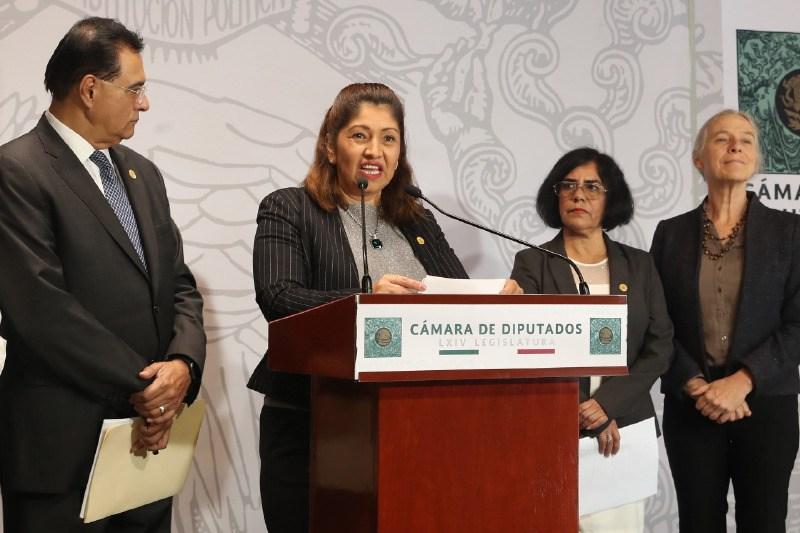 Solving bad distribution and privatization and guaranteeing human access to this resource is necessary.

Palacio Legislativo, 11-03-2020 (Notilegis). Members of the parliamentary group, Partido del Trabajo (PT), and Morena supported the citizens' initiative to create the new General Law on National Waters, in order to solve poor distribution and privatization and to guarantee human access to this resource. In a press conference, the deputy Marta Dekker Gómez (PT)--accompanied by her vice-coordinator, Benjamín Robles Montoya; the legislators of Morena, Leticia Díaz Aguilar and Laura Mónica Guerra; and members of the civil organization "Agua para Tod@s"-- pointed out that the design of the General Water Law which would replace the National Water Law has been pending for seven years.

She explained that the citizens' initiative that was presented to the Chamber of Deputies last February 7, was turned over to the National Electoral Institute (INE), which has one month to verify the authenticity of the 150,000 signatures that support it.

Dekker Gómez said that they will await the resolution of the electoral body, however, "we do not want the time to run out and for an initiative not to be entered before the ruling begins in the Commission of Hydraulic Resources, Drinking Water and Sanitation." "The 36 deputies who make up the PT parliamentary group will be doing everything possible to see that this initiative is presented tomorrow in the name of the caucus," he said.

Robles Montoya commented that "with great pleasure, the PT makes this citizen initiative its own." Too much time has passed to regulate article 4 of the Constitution, which recognizes that everyone has the right to sufficient access, disposal and sanitation of water for personal and domestic consumption.

Deputy Díaz Aguilar, secretary of the Commission for Hydraulic Resources, Drinking Water and Sanitation, reported that various initiatives have been presented in this line in the commission.
The legislator Mónica Guerra asserted that it is necessary to create a law that really guarantees the human right to water in an equitable way, with a vision of sustainability and protection of the environment.

Elena Burns and Óscar Armando Monroy Hermosillo, members of the “Agua para tod@s” collective, are pleased that different parties are studying their initiative.