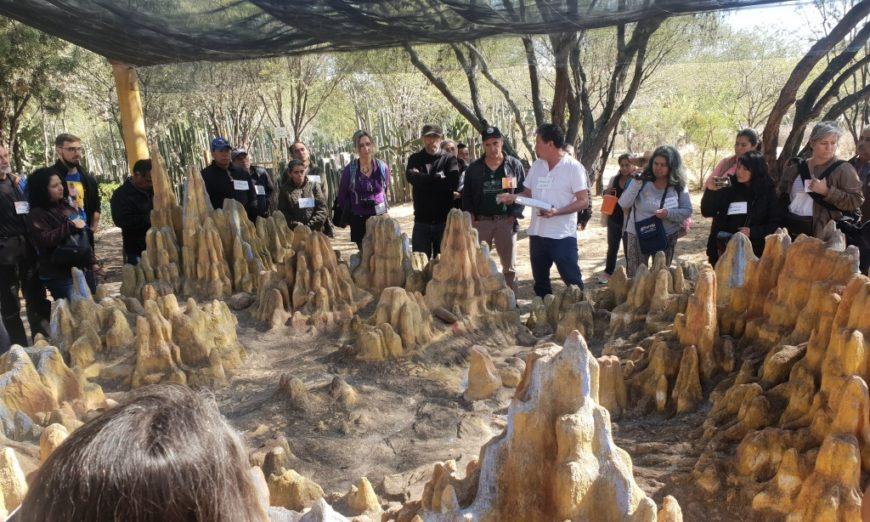 MEXICO CITY [translation] - Foreigners who participated in the # ToxiTourMéxico criticized the worrysome situation they witnessed in regard to environmental pollution resulting from from the industries established as part of the free trade agreements with the United States, Canada and the European Union.

"We are in a real state of shock, shocked by what we have seen," said Mikel Otero, a member of the Basque Parliament and one of the international observers who visited some of the most polluted sites in Mexico from December 2 to 9.

"We knew that we were going to face a difficult and complex reality, but the scale of the destruction we have seen and the number of people affected in their health by uncontrolled industrial development is of such magnitude that we cannot say otherwise," he said.

During the tour, the foreign delegation registered around a thousand toxic substances dispersed in water, soil and air, and so they urged the Secretary of Environment and Natural Resources (Semarnat) to declare an Environmental Emergency in the affected sites, as they represent damaged health for three million people.

According to the delegation, they received information that the inhabitants of the points visited present various diseases, such as liver, kidney, skin and stomach cancer, as well as leukemia, genetic mutations, spontaneous abortions, kidney failure, dental and skeletal fluorosis, among others.

At a press conference, the visitors stated that they were surprised by the impact that foreign companies such as Volkswagen, Audi, BASF or Bayer have on the environment.

Peter Clausing, a German toxicology specialist and member of the Mexico organization via Berlin, said that the last eight days (from December 2 to 11) was like time travel to 60 or 70 years ago, when there were no environmental standards in Europe and people died from the same diseases that are now occurring in Mexico, because the population is exposed to substances such as arsenic, mercury and lead, among many other harmful metals.

In Puebla alone, he added, residents denounced the German companies Volkswagen and Audi that have overexploited water wells while there are communities that lack it, and said that in recent years 258 mining concessions have been granted that pollute the environment.

In addition, they pointed out that, in municipalities such as La Cofradía, there have been reports of mental retardation in 40% of the population related to toxic substances, in addition to a high prevalence of hematological alterations, microcytosis, hypochromies (indicating a lack of hemoglobin) and platelet decrease in 70% of the child population, which sets the path to diseases such as leukemia.

“What we have seen is a war against Mexicans living in those areas, a war with chemical and biological weapons, a sick population, suffering almost without the semblance of living, and also criminalized and murdered, which shows us that the model based in free trade has failed completely,” said Alexandra Almeida, of the Ecological Action organization of Ecuador.

Patricia Torres Ray, an American senator, said that in her country there is great confusion about the number of Mexicans who are willing to risk their lives on the border, but after visiting the most polluted areas - she added - she has understood that the work areas in the countryside have been devastated due to the irresponsibility of the companies.

After hearing the testimonies of the affected communities, MEPs, US lawmakers and international observers from Germany, Argentina, Bolivia, Ecuador, the United States of America, Catalonia, Spain, the Basque Country and Ireland, pledged to bring criticisms to their Parliaments that they should make companies comply with the standards established by the World Health Organization (WHO) and be sanctioned if they do not.

“We want to take [people from the Caravan to speak and tell MEPs the circumstances that the most vulnerable and poor suffer [in Mexico], because they are the real victims,” said MEP Maria Eugenia Palop.

Finally, Andrés Barreda, a researcher at the National Autonomous University of Mexico (UNAM) and a member of the Assembly of Environmentally Affected Persons, explained that according Baskut Tuncak, the rapporteur of the United Nations (UN) on toxic substances management, the exposure to toxic substances represents “cases of violence” and of violation of human rights, so he urged the authorities to clarify its effects on health.

The international observers and legislators toured El Salto, Jalisco; Dolores Hidalgo, Guanajuato; Apaxco and Atitalaquia, Hidalgo, and the State of Mexico, as well as El Río Atoyac, Tlaxcala and Puebla, and the North Isthmus Coatzacoalcos, Veracruz.