Enrich the Soil, Cool the Planet 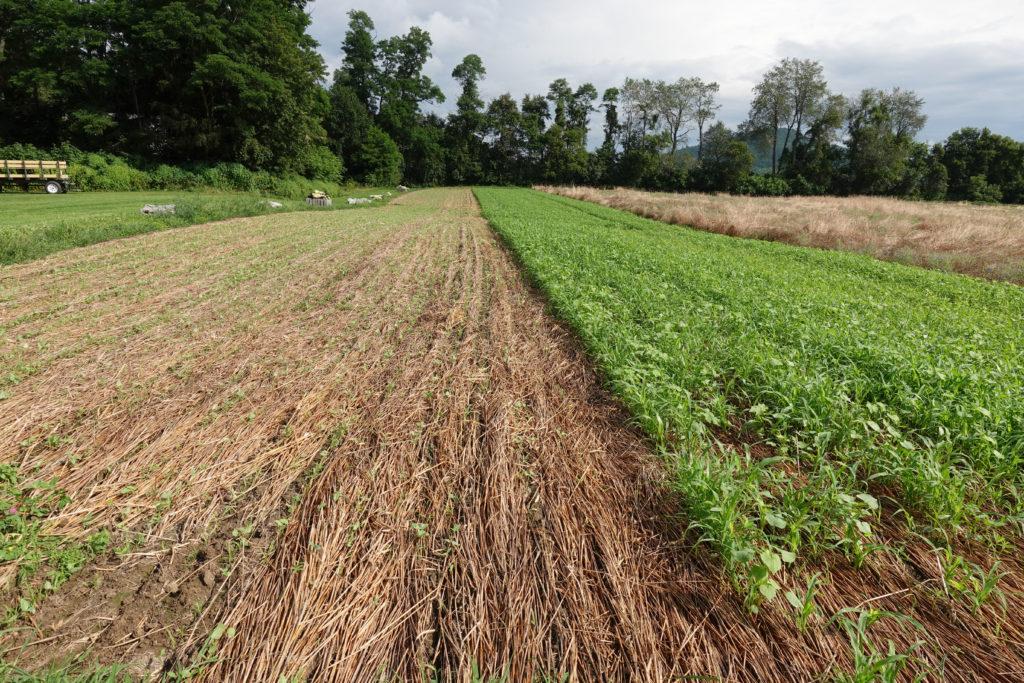 Fairlee, Vermont — Americans are more concerned about climate change than ever. An average of national polls conducted by Gallup this March showed that 59 percent of Americans “believe the effects of global warming have already begun” and that 45 percent of those asked, “think global warming will pose a serious threat in their lifetime.” It’s unsurprising that climate change has emerged as a central issue in the Democratic primary campaign as voters and concerned citizens across the country ask what they can do to fight global warming.

Thus far, much of the reporting and activism on climate change, from the droughts in Chennai, India, to the burning of the Amazon rainforest, has focused on the increase in the greenhouse effect due to the rise of man-made carbon emissions in the earth’s atmosphere. Climate activist organizations like 350.org have focused their efforts almost solely around encouraging Americans to decrease the amount of carbon emissions they produce, through using renewable technologies and decreasing fossil fuel dependence. But away from the climate rallies, newspaper headlines, and halls of academia, small groups of farmers, scientists, and climate activists are turning to an alternative solution to fight climate change: the soil.

Standing before a room of farmers and activists in early August at a workshop titled, “The Soil-Carbon Sponge Strategic Gathering,” Walter Jehne told the audience, “It’s all about the sponge!” Jehne, a respected soil microbiologist who has worked with the Australian government’s scientific research organization (CSIRO), with the UN and a host of NGO’s, has dedicated the last 30 years of his career towards teaching communities how better soil management practices can reverse climate change. He points out that the storms, floods, droughts and wildfires we associate with climate change are all hydrological effects caused by the severe imbalance in our water cycles. This is the result of centuries of poor land management — notably deforestation, eco-system destruction, and destructive agricultural practices. 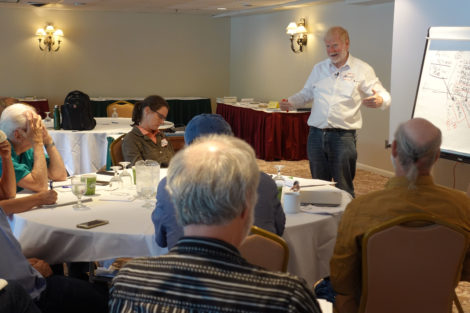 At the workshop, Jehne was joined by his colleague, Didi Pershouse, a noted author and board chair of the Soil Carbon Coalition. In a conference room at Lake Morey resort overlooking the rolling hills of southern Vermont, Jehne, armed with a whiteboard, markers, and an encyclopedic memory for statistics, presented a new vision for reversing climate change centered around restoring the hydrology of the planet — it’s a process he calls, “Regenerating Earth.”

Jehne’s pitch is simple. He argues that entirely eliminating our reliance on fossil fuels is unfeasible, and that even if we did, it would not reverse the impacts of climate change. Instead, we must focus our efforts on water, as water vapor is the most abundant greenhouse gas. He explains how the circulation of water through the atmosphere, as vapor, hazes, clouds, and rain, both cools and warms the air, balancing the atmospheric temperature. For Jehne, the only meaningful way to tackle global warming is by cooling the planet through restoring these natural hydrological cycles. For centuries, these cycles have been disrupted by deforestation and agricultural practices that destroy the soil so that it can no longer hold water. Rebuilding the soil requires new forms of land management, including eco-restoration and what is commonly referred to as ‘regenerative agriculture.’

Eco-restoration is the process of repairing damaged eco systems. For Jehne, it’s all about rebuilding the soil-carbon sponge. In his 2017 paper “Regenerate Earth” for Healthy Soils Australia, Jehne draws his reader’s attention to the capacity for healthy soils to cool the planet by restoring the water cycle and sequestering carbon. He writes, “Nature created our soils, bio-systems, their hydrology and climate via carbon drawdown rates that exceeded oxidation rates, yet for 10,000 years we have reversed this, greatly increasing carbon oxidation relative to draw down rates via our clearing and burning of forests and soils for agriculture.” He explains that bare soil reradiates energy more powerfully than land covered by plants.

Soils are considered healthy if they are rich in subterrestrial life, including bacteria and fungi. Mycorrhizal fungi in the soils form a symbiotic relationship with plants that supply them with nutrients. These fungi secrete a substance that forms little clumps of soil, and between these clumps are pockets of air. Soils rich in mycorrhizal fungi are therefore more porous and function like a sponge in their capacity to absorb and retain water. In contrast, unhealthy soils have less capacity for holding water, and rainwater runs off, causing a cycle of floods and draughts. This runoff can carry fertilizer and toxic chemicals into the streams, rivers, and oceans, damaging eco-systems there.

How do farmers and land managers rebuild the soil-carbon sponge? For this, Didi Pershouse has detailed a list of regenerative agriculture principles. But she notes that there is no one formula and that famers operate on a case-by-case basis. In contrast to conventional farming practices, regenerative agriculture is premised on the idea that rather than trying to “improve upon nature” farmers and land managers should work in harmony with it. In keeping with that belief, regenerative farming requires no pesticides, herbicides, or genetically modified seeds. Instead of leaving fields bare after harvest, regenerative farms grow perennial cover crops in order to rebuild the soil-carbon sponge. In addition, tillage is kept at a minimum, because any tillage kills the mycorrhizal fungi and other organisms that live near the soil’s surface. Regenerative farming also calls for the rotational grazing of livestock. This has many benefits — it allows the animals to compost the soil with their manure and urine, and prevents them from overgrazing.

Jehne believes that regenerative agriculture and eco-restoration are the only ways to rebuild our soils, which he argues will dramatically cool the climate as well as reverse many of the symptoms of climate change, from decreasing flooding to preventing wildfires. Referring to the natural processes of photosynthesis and the water cycle, he writes, “We can use these processes to rapidly regenerate the more than eight billion hectares of degraded soils and bio-systems to restore the Earth’s key bio-hydrological cycles that still govern 95 percent of the heating and cooling dynamics of the blue planet.” In addition, he projects that there is still time to reduce wildfires in 3.5 billion hectors across the globe, and draw down 20 billion tons of CO2 annually.

While Jehne is cautious not to point a finger at any one culprit as the cause of widespread soil destruction, he routinely bemoans the chemical agriculture model employed by most U.S. farms. He writes, “These high input industrial agricultural practices have seriously degraded soils in over half of the Earth’s 1.5 billion hectares of crop lands and many grazing systems.” Jehne explains that of the 14 billion hectares of ice-free land on the planet, 5 billion hectares are man-made desert and wasteland. For a sense of scale, a hectare is approximately 2.4 acres.

Jehne and Pershouse are far from the first people to advocate for the principles of regenerative farming. Across the globe, farmers, scientists, and activists are echoing the call for a new agricultural model. Zimbabwean ecologist Allan Savory has been one of the most high profile champions of regenerative land management, gaining international attention for his 2013 Ted Talk titled, “How to fight desertification and reverse climate change.” He now leads the Savory Institute, a global movement of activists, farmers, and companies who work to implement the principles of regenerative agriculture across Africa and the world. 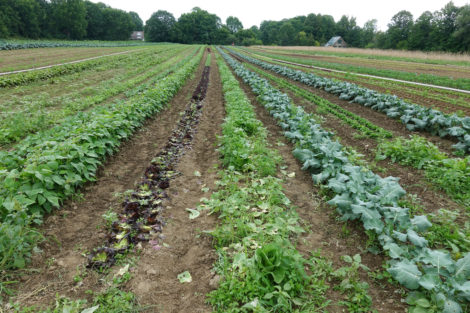 Critics of the regenerative agriculture movement often raise concerns about the costs of growing food using these principles. In response, Walter and his collogues are quick to point out the hidden costs of conventional farming, and the long-term savings that come with sustainable practices. These hidden costs have been known by researchers for decades. In a scientific correspondence in Nature in 1987, marine biologist Thomas J. Goreau, expressed his frustration with the conventional wisdom around the price of industrial farming. He writes “Current land ‘development’ practices that ignore changes in community eco-physiology have a large hidden price tag. They diminish the capacity of the biosphere to modulate atmospheric CO2 which increases the magnitude and duration of climate alteration beyond those forecast by conventional climate models.”

In corporate America, a handful of multinationals are starting to take a look at regenerative farming as a viable new practice. General Mills recently announced an initiative to “advance regenerative agriculture practices on 1 million acres of farmland by 2030” and in Boston, the biotech company, Indigo, has launched a campaign to remove one trillion tons of CO2 from the atmosphere through plant photosynthesis.

But even if corporate America warms to the principles of eco-restoration and regenerative land management, Walter knows the road ahead will be full of obstacles. Ultimately, he believes the change he envisions will only come about through a grassroots movement of mobilized famers, scientists, and activists, not moneyed interests or politicians. In his closing remarks at the workshop, Jehne acknowledged the moon-shot nature of his vision. “We have a saying in Australia,” he said, grinning as he glanced around the room, “If you haven’t got a chance, take it.”