The Global Food System: A Waste of Energy 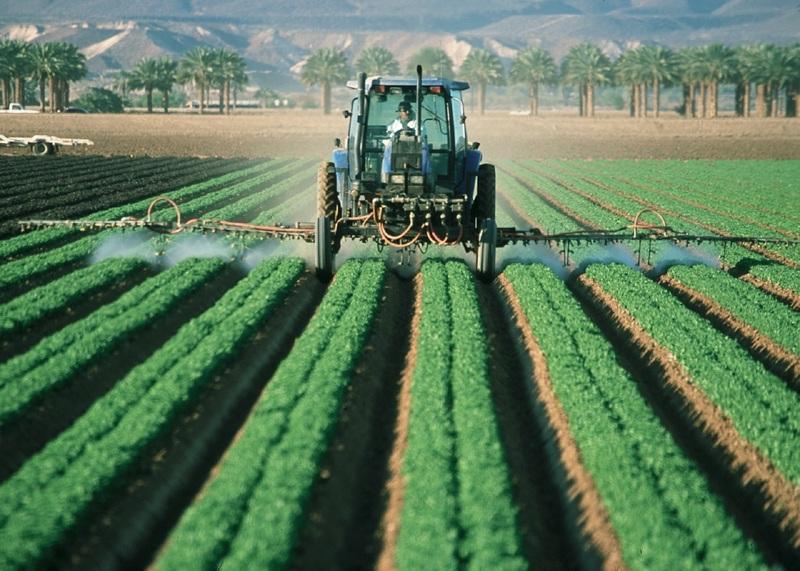 "It is clear that if we want a more sustainable model, the world food system has to be completely turned around. We need to move towards agro-ecological production methods that use hardly any external inputs and put an end to highly processed, energy-guzzling junk food. We need to stop moving raw materials and food around the world as if the food system were a global travel agency and move to localized production and consumption."

From Sun to Oil

The global food system – from farm to fork – uses an enormous amount of energy. According to the UN Food and Agriculture Organisation, some 30% of all the energy used in the world is dedicated to power the food system. So almost one-third of all the world’s energy is used to feed us. Most of that energy comes from fossil fuels. Those of us who thought that agriculture is all about turning the energy of the sun into food, will ask: how is that possible?

The answer lies in how our food system, over the past 50 years or so, has become industrialised and globalised. Indeed, for most small farmers in the world that produce for home consumption or sell at local markets, farming is still very much about using the sun, water and soil with their hard labour. But driven by giant food and agrichemical corporations, the global food system has undergone a tremendous transformation. Today, 70% of the energy used in the global food system is deployed after the food has left the farm.

Can we eat without oil? 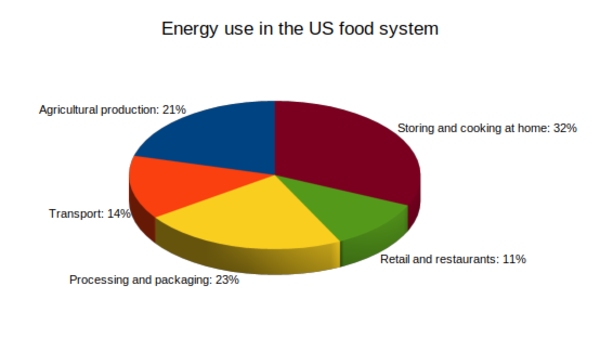 Going further into the different phases of the US food system, transport is an important devourer of energy with 14% of the pie. This is not surprising as, for example, between 50% and 90% of all fresh vegetables consumed in the US are produced in one valley in California. But one also has to look at the huge amount of food imports and exports that the country depends on, all of which require enormous amounts of energy.

Perhaps the most surprising part of the energy pie of the US food system is the tremendous amount used by food processing and packaging. This is where the big corporations such as Nestle, Unilever and PepsiCo make most of their profit: selling us highly processed prefabricated food in plastic, bottles, tins, wrappers and cartons that not only require enormous amounts of energy to produce, but also result in piles of difficult-to-recycle waste.

The situation in Europe and Spain is not much different. One study calculated that the food system in the European Union accounted for 26% of all the EU’s energy use in 2013. Another study by the Universidad Pablo de Olavide in Sevilla, put this number at 30% for Spain. As in the US, much of this comes from transport, processing and the production of fertilizers and agrochemicals. The example of how Southern Spain produces most of the vegetables for the rest of Europe in winter tells it all. Another example shows how Spain imports 80.000 tonnes of potatoes from the UK every year while it exports 26.000 tonnes back to the Brits at the same time.

An often forgotten element of today’s food system is the energy that is wasted producing food that nobody eats. More than one-third of the food we produce is lost or thrown away, and with it about 38 percent of the energy consumed in the agrifood chain. Wasted food equals wasted energy.

Another element to stress in the energy-food discussion is the impact on climate. The industrial food system emits enormous amounts of greenhouse gases, not only because of its energy intensity but also resulting from soil erosion, loss of organic matter and the emissions caused by the use of chemical fertilizers. The latest International Panel on Climate Change report estimated that the food system accounts for up to 37% of total global greenhouse gas emissions.

Industrial food based on renewables

So what can be done about this? Agribusiness and food corporations quickly point to their efforts to produce more efficient machinery and move towards renewable energy. But as we have seen above, the use of machinery is just a minor part of the energy use in the industrial food chain. The real problem lies in the energy needed to massively move commodities across the globe, the processing and packaging, the production and use of fertilizers and agrochemicals, and the enormous waste that this produces.

If we are to move to more sustainable ways of doing things, the global food system needs to be turned around. We must transition to agroecological production methods that use fewer external inputs. We need to stop moving commodities and food worldwide and shift to localised production and consumption. And, lastly, the corporate push for highly processed and energy-devouring junk food needs to be restrained.