Growing Change: Can Agriculture Be Good for the Climate? 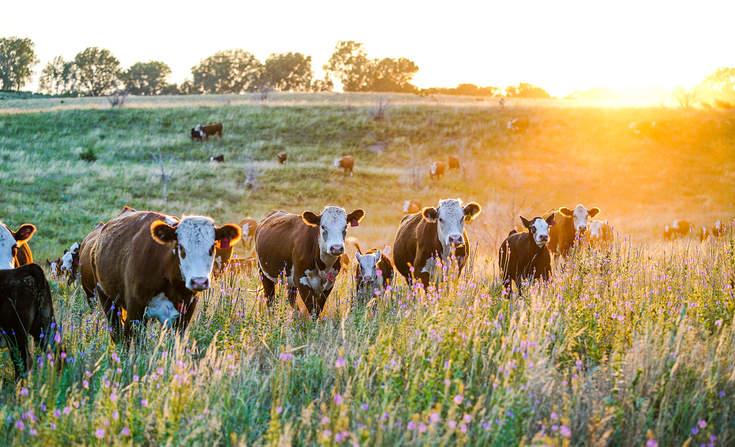 Last year California set a goal to become carbon-neutral by 2045. Some called it unrealistic, while we call it mission-critical. But how do we get there? As we search for ways to reduce greenhouse gas emissions to prevent global atmospheric temperatures from rising above 1.5 degrees and result in irreversible climate change, one of the best answers is as old as the dirt under our feet, literally.

Let’s go back to basic science. Soil naturally has large amounts of carbon. Healthy soil — soil rich in nutrients and able to retain water — holds the carbon that plants absorb from the air and bring into their root system and sequester in the soil as root and plant matter decompose. Also, healthy soil is teeming with microbes which also bring carbon deep in the soil.

Agricultural scientists across the globe, including at Stanford University and the University of California, Davis, have in recent years been making new discoveries showing that healthy soil holds more carbon than previously thought and that good soil management can serve as an important carbon sink. Soil, writes Rob Jackson of Stanford’s Woods Institute for the Environment, "is a no-risk climate solution with big co-benefits. Fostering soil health protects food security and builds resilience to droughts, floods and urbanization."

Unfortunately, over the last half-century of primarily monocrop agriculture, repeated plowing and regular use of pesticides and chemical fertilizers, the average amount of carbon content in agricultural soil gradually has depleted, according to studies, which has led to the need for more fertilizer to maintain production levels. Between synthetic fertilizer and cattle growing via confined animal feeding operations to satisfy a world population hungry for meat, agriculture is a net carbon emitter — a substantial one. Agriculture accounts for about 13 percent of global greenhouse gas (GHG) emissions and 9 percent of U.S. emissions, according to the U.S. Environmental Protection Agency. When including the emissions resulting from clearing forested land to plant crops, those numbers are even bigger.

But lately, a healthy soil movement has taken hold, focused on practices referred to as regenerative farming, offering intriguing possibilities of agriculture as a carbon sink. Often born of necessity as farmers grapple with less water, increased erosion and the rising costs of chemical fertilizer, some farmers are adopting a set of practices to make soil resilient, rich and in need of fewer inputs — and it so happens such soil is better at storing carbon underground. These regenerative practices include reduced tilling to keep decomposing organic matter in the soil; planting off-season cover crops which bring new nutrients to the soil and protect it from erosion; using compost and manure as fertilizer; and rotating crops and animal grazing among fields to give soil a chance to replenish. Collectively, these practices reduce the need for irrigation, fertilizer and herbicides.

Soil is a no-risk climate solution with big co-benefits.

California has identified agriculture as one of a range of solutions to reducing GHG emissions and getting to carbon neutrality, said Mary Nichols, chair of Air Resources Board, speaking in San Francisco recently. Her agency is drafting a Natural and Working Lands Climate Change plan to encourage good land and soil management so that farmlands, forests, rangelands, wetlands and coastal lands are more resilient to climate change impacts, emit fewer GHGs and serve to sequester carbon.

California also has a Healthy Soils Program that promotes practices that nurture soil on California’s farmlands and ranchlands. Before the state legislature is SB 253, which would create the California Environmental Farming Incentive Program to provide technical and financial assistance to farmers who create wildlife-friendly improvements on their land to promote biodiversity and improve soil. We believe all these efforts are worthwhile.

While regenerative farming helps in the effort to rein in climate change by drawing carbon from the atmosphere into the soil, it has many other farming benefits, such as lower costs for water and fertilizers because healthier soil needs fewer inputs. Consequently, regenerative farming is gaining adherents among farmers and food and beverage companies.

At Fetzer Vineyards' organically farmed brand, Bonterra Organic Vineyards in Mendocino County, vineyard managers follow a reduced tillage regime, allowing the soil to nourish itself with the plant residue of previous seasons and microbes working in the soil. The Bonterra team plants cover crops to prevent topsoil erosion and allows sheep to graze on these cover crops and grasses, reducing the need for machine mowing while promoting soil fertility, according to Joseph Brinkley, director of vineyard operations.

Last month, Bonterra announced a study undertook in partnership with Pacific Agroecology Inc. that included year-long monitoring and research comparing carbon levels in vineyards in Mendocino County. It measured soil organic carbon (SOC) storage, benchmarking results against a nearby conventionally farmed vineyard. In all, the research Bonterra commissioned tested 100 soil samples and 500 vine root samples periodically over the course of a year.

The Pacific Agroecology found that soil samples from the Biodynamic form of regenerative agriculture and organic vineyards held an average 12.8 percent and 9.4 percent more SOC respectively than samples from the conventionally farmed vineyard, according to the researchers.

Elizabeth Drake, director of regenerative development at Fetzer, says, "The results of this study provide early indication that regenerative farming practices lead to healthier, more productive soils, while contributing to the mitigation of climate change by holding more carbon underground."

General Mills, meanwhile, recently announced a commitment to advance regenerative agriculture on 1 million acres of farmland by 2030. Its support involves financially assisting the adoption of regenerative practices in regions where General Mills sources key ingredients. The plan encompasses a range of farm commodities, including the dairy products used in its California-based Annie's brand. General Mills helped finance the development of Carbon Farm Plans on three Organic Valley dairy farms in Sonoma and Marin counties. These plans help farmers understand the GHG emissions associated with their operations and provide opportunities to offset emissions and sequester carbon through practices such as cover cropping and rotational grazing, according to General Mills.

In 2015, General Mills set a goal to reduce GHG emissions across its value chain by 28 percent from 2010 levels by 2025 and it sees reducing agricultural emissions as key to reaching that goal.

"The majority of our GHG emissions come from the supply chain and 50 percent of those emissions come from agriculture," says Christina Skonberg, senior sustainability analyst at General Mills. "We see regenerative agriculture as a critical part of how we can address climate change." Regenerative practices also have the potential to build economic resilience on farms by reducing the need for expensive inputs and helping farmers buffer risk from threats such as pests, diseases and climate shocks, she says.

As climate change has increased the severity and likelihood of droughts and floods, farmers and everyone who depends on them face more risks. We hope the state legislature and air regulators continue on their path of developing and adequately funding programs that encourage regenerative farming practices, conservation and smart land management, such as SB 253 and the Natural and Working Lands Climate Change Plan. Otherwise, steadily increasing incidences of extreme weather events will have dire consequences for farmers and all of us.

Carbon neutrality and holding down atmospheric temperature rise to not exceed 1.5 degrees Celsius are, as we said, mission-critical.