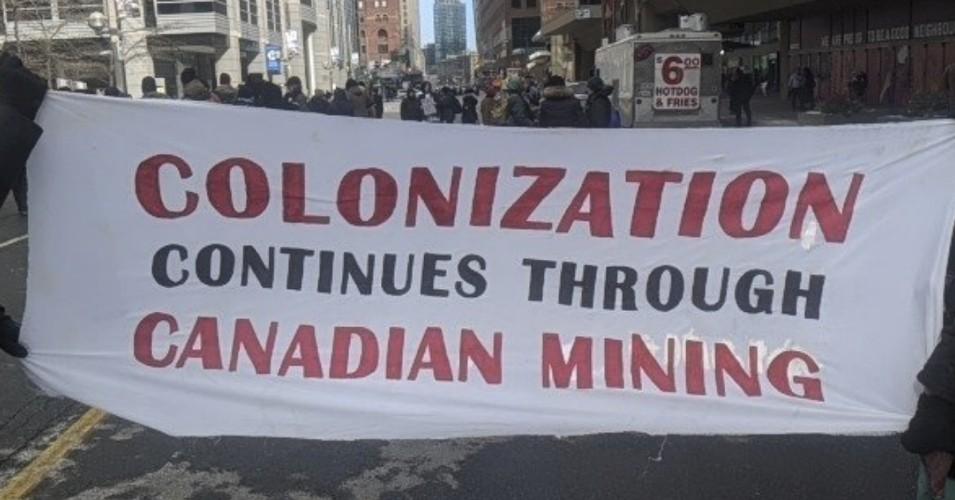 Demonstration held "in solidarity with every community that has found itself staring down the barrel of a gun for daring to oppose Canada's ongoing colonial project through resource extraction."

Hundreds of people led by Indigenous land defenders and a coalition of environmental groups worked to shut down a large mining industry convention in downtown Toronto on Sunday, blockading the entrances to the building where the meeting was taking place as they protested against "the extractive industry's violence, ongoing colonization, and complete disregard for the future of life on this planet."

Sunday's action—aimed at the Prospectors and Developers of Association of Canada (PDAC)—is the latest solidarity demonstration aligned with the Wet'suwet'en First Nation nation that remains locked in a fierce battle with the Canadian government over the controversial "Coastal Gas Link" fracked gas pipeline through unceded territory in northern British Colombia.

"From coast to coast we are rising up in solidarity with the Wet'suwet'en nation and against colonial violence and land theft," said Vanessa Gray, Anishinaabe Kwe Land Defender from Aamjiwnaang First Nation and one of the organizers of Sunday's demonstration. "It's clear that Canada is a state built on the removal of Indigenous people for resource extraction."

#PDAC2020 surrounded by hundreds in Toronto out to #disruptPDAC and #shutdowncanada in solidarity with all land and water defenders fighting their extraction projects. #topoli pic.twitter.com/Z8XYc0g9Fs

Organizers said the convention deserves to be targeted as the biggest one of its kind in the world, with PDAC drawing an estimated 25,000 people each year as it brings people from resource extraction companies together with funders and suppliers as well as law firms, politicians, and diplomats engaged in the industry. "The conference," said Mining Injustice in a statement, "is sponsored by mining giants known for their significant human rights and environmental abuses around the world."

According to Gray, "The very companies and people who provide the economic and political support for Coastal Gas Link are inside PDAC this year, and so are representatives from hundreds of other companies that are enacting violence around the world."

Not just for the Wet'suwet'en, she said the direct action was "in solidarity with every community that has found itself staring down the barrel of a gun for daring to oppose Canada's ongoing colonial project through resource extraction."

The main entrance to #PDAC2020 on Front St is shut down by a wall of supporters facing a wall of police. #DisruptPDAC #shutdowncanada pic.twitter.com/sJNVtSxEcG

As the demonstrators attempted to blockade the entrance to the convention center, Toronto police stepped in:

"We want to make our voices heard and our presence seen because there are communities that this conference is directly impacting," Gray said. "The industry is doing mare harm than good for our future, our environment.”

Some of the messages outside the mining convention #PDAC. Protesters say: “it has never been more clear that oil and mining companies dictate government policy, and railroad over Indigenous rights in doing so.” @CityNews pic.twitter.com/lScQRRvDJJ

Kirsten Francescone, a member of MiningWatch Canada, told reporters ahead of the action: "I think, every day, the ecological crisis gets worse."

"We definitely cannot think that more destructive mines that violate human rights and destroys people's environments is our way out of that ecological crisis,"  Francescone added. "I am really concerned that the mining industry is using this space to say that we need mining to save us from climate change. We're here to say that shouldn't be the case. We want other kinds of ways forward for a better future for all of us."

While Francescone warned that the world is in "a moment of global ecological crisis, and unchecked resource extraction is a major cause," her fellow activist Rachel Small, who works with the Mining Injustice Solidarity Network, said the tide is turning.

"More and more people are seeing the colonial violence all around us for what it is, and recognize that PDAC and everything it stands for is fundamentally incompatible with the world we need to build," said Small. "From coast to coast people are also recognizing our collective power to fight back."

Along with First Nation allies and others, Small said: "We won't let Canada and the extractive industry at its helm continue to propel us towards a planet that is unlivable. We demand an end to all extractive violence that enables colonization of Indigenous land, forced displacement, violent repression, and wide scale contamination of land, water, and air. And that starts with disrupting PDAC today."