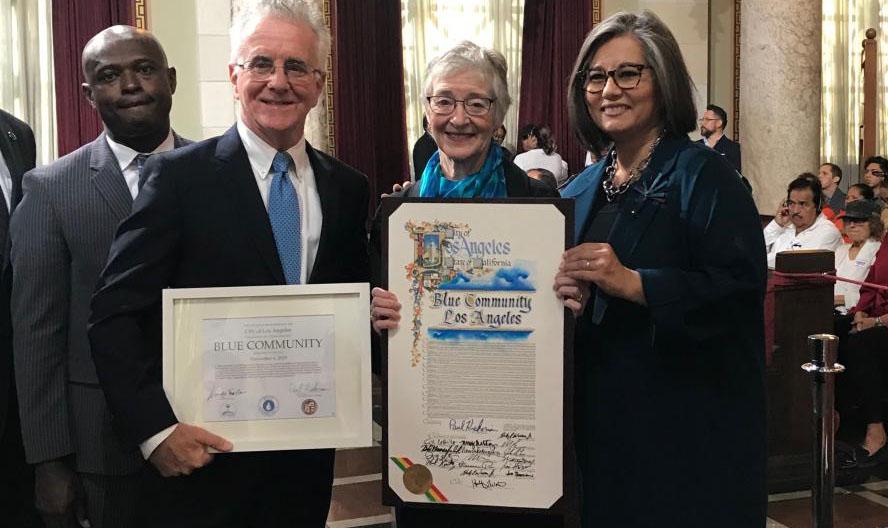 Council of Canadians Honorary Chairperson Maude Barlow was in Los Angeles yesterday to help celebrate the city’s designation as a Blue Community.

Los Angeles is now the first major city in the U.S. to turn “blue,” joining cities around the world including Paris, France, Bern, Switzerland and Montreal in Canada to take clear steps to protect public water services.

“Protecting our water must be a global project,” said Council of Canadians Honorary Chairperson Maude Barlow. “In the past 10 years we have seen this movement grow in Canada, Europe, South America, and now our made-in-Canada idea has made it in Los Angeles.”

The Blue Community initiative commits the city to recognizing water and sanitation as human rights, promoting safe water and wastewater services and to phasing out the sale of bottled water at municipal events.

In Los Angeles, Council member Paul Krekorian led the fight. “This designation recognizes the groundbreaking efforts Los Angeles has undertaken in the areas of water rights, water quality, access and conservation, while also committing ourselves to meeting the future water needs of all Angelenos.”

The Blue Communities Project launched in 2009 as a joint initiative of the Council of Canadians, the Blue Planet Project, and the Canadian Union of Public Employees.  It encourages people to work with their local elected representatives to bring forward resolutions that treat water as a common good that is shared by everyone and is the responsibility of all. There are now more than 23 million people living in Blue Communities.

The Council of Canadians congratulates Los Angeles for prioritizing public water and becoming a Blue Community!