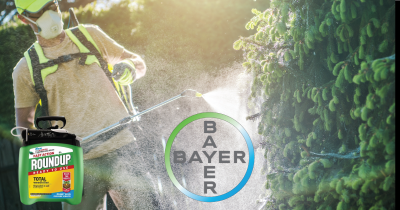 Annually, for weeks at a time over his more than 30 years of farming, John Barton would spray a thousand gallons of Roundup every day to kill the weeds springing up among his cotton crop outside Bakersfield, California.

Tugging a 200-foot hose when he couldn’t use his tractor or sometimes wielding a container of the herbicide strapped to his back, Barton or his three boys would walk and spray, sometimes in temperatures reaching 110 degrees. They would come home drenched in sweat and the weed-killing chemical, their clothes, boots and socks sopping wet and their toes pruned by the deep saturation.

“They said it was as safe as table salt. It’s so safe you can drink it. And it’s so effective now with GMOs,” he said, referring to crops genetically modified by Roundup’s parent company Monsanto to tolerate the herbicide, “that they can spray it over a multitude of crops and it gets into the root structure of just the weed and kills the plant totally.” John Barton speaks in Fresno, California, about the alleged link between glyphosate and cancer at a press conference in 2017.Courtesy of Baum

Barton, now 70, retired from farming in 2010 and planned to move to northern Idaho with his wife. But then he was diagnosed with non-Hodgkin lymphoma in 2015, and he soon concluded that the miracle herbicide that he depended on for decades had caused the swollen lymph nodes that have since derailed his life.

He is now a litigant alongside 40 other plaintiffs in just one of the approximately 11,000 pending cases against Bayer AG relating to glyphosate, the main ingredient in the Roundup cocktail sold by Monsanto since the 1970s. A federal judge in California has ordered the company to engage in mediation to try to settle the cases, and Monsanto has consistently defended the safety of the product. Since Bayer purchased Monsanto in June of last year, however, the German firm’s stock price has plunged to nearly half its value due, in part, to picking up Monsanto’s numerous legal challenges.

Three lawsuits this year have awarded the plaintiffs against Bayer AG massive sums of money, most recently more than $2 billion to a California couple early last week.

Alva and Alberta Pilliod of Livermore, California, were both diagnosed with non-Hodgkin lymphoma after using the chemical on their lawns for years. After a five-week trial, the jury set punitive damages at $1 billion apiece for the couple, as well as another $55 million in damages.

“We showed them the raw data. We showed them the hard science. We showed them the studies that the EPA never saw, and at each trial they came to the same conclusion: that this causes cancer,” said Brent Wisner, vice president and partner of Baum, Hedlund, Aristei & Goldman, who has worked on all three winning cases and most recently argued in the Pilliod trial.

The trial’s conclusions comes shortly after the Environmental Protection Agency said in a statement earlier this month “that glyphosate is not a carcinogen.” That statement is what Bayer may be hanging its hat on in future cases, which Bayer referred to in their own remarks after the Pilliod decision last week.

“We are disappointed with the jury’s decision and will appeal the verdict in this case, which conflicts directly with the U.S. Environmental Protection Agency’s interim registration review decision released just last month, the consensus among leading health regulators worldwide that glyphosate-based products can be used safely and that glyphosate is not carcinogenic, and the 40 years of extensive scientific research on which their favorable conclusions are based,” they said.

Bayer lawyers said in a call with reporters on Wednesday that they intend to challenge the court ruling. The plan is to argue that because the EPA — the United States’ highest regulatory body in this field — concluded that there is no clear link between glyphosate and cancer, Bayer is not liable and all cases against the company should be thrown out.

“Legally this is preposterous,” Wisner said. “There are lawsuits involving drugs and products that have been approved by the EPA and FDA that won, so there’s a strong body of case law that says that doesn’t excuse you of liability. And compounding that, we have internal Monsanto documents in which they admit this is geno-toxic — they know this causes cancer.”

In the Pilliod case, Wisner’s team introduced Monsanto’s own warning label that they provide their employees as evidence. The label encourages workers to wear chemical goggles, boots and other safety protection when spraying RoundUp. They also procured an internal Monsanto study in which scientists recommended that people wear gloves and boots when using the company’s lawn and garden concentrate.

Farmers have a mixed view of Roundup

Glyphosate is the most-used herbicide in the United States, with most of its application taking place on farms.

Its agriculture use jumped from 635,000 in 1974 to more than 1.25 million kilograms in 2014, according to a 2016 study published by the journal Environmental Sciences Europe, accounting for 74 percent of the consumption globally.

That’s likely because of how powerful it is, experts say.

"It’s still an extremely effective tool for us to control weeds,” said Stanley Culpepper, professor and extension agronomist in the Crop and Soil Science Department at the University of Georgia. “It’s important to understand that if we can’t control our weeds then it will be hard to feed the world effectively and efficiently — and that’s the goal.”

Culpepper said he talks to the occasional farmer who is concerned about the potential link to cancer, but, for the most part, they trust the regulatory authority and the product that has worked effectively against weeds.

So for many American farmers, despite some concerns over the allegations of its link to cancer, Roundup isn’t going anywhere — and that means it's unlikely to leave the market any time soon.

“I may have had a half-dozen questions about what's the situation with glyphosate,” Culpepper said. “I’m a scientist. I believe science, and I’ve had the ability to work with the EPA scientists behind those programs — they have some fantastic science. They’re the regulatory authority, and as long as they’re clear, I believe the science and I believe they’re leading us the right way.”

Critics including public health advocates and environmental groups question whether the EPA is fulfilling its regulatory duty and they point to the World Health Organization's warning that glysophate is "probably carcinogenic."

Still, some farmers feel that going after Roundup is equivalent to going after their crops during a difficult financial time. More than 160,000 farms in the U.S. disappeared from 2007 to 2017, according to the USDA Agriculture Census released in April, and many farmers are currently facing economic hardships from low commodity prices, the trade war with China and numerous natural disasters.

But Wisner and his legal team said they aren’t trying to roil an already beleaguered industry. The goal isn’t to take the product off the shelves, Wisner explained, but to ensure that they pay for misleading consumers.

Barton said that’s what he wants most of all to come out of his case: that the company takes responsibility for their product.

“I just think about the amount of Roundup that I used over the years, and then my sons started working for me when Monsanto claimed it was a safe product,” he said. “I let my sons put those sprayers on their backs, and I’m worried. Now my biggest concern is as a parent."