Reflections on the Plebiscite about the Beer Factory in Mexicali 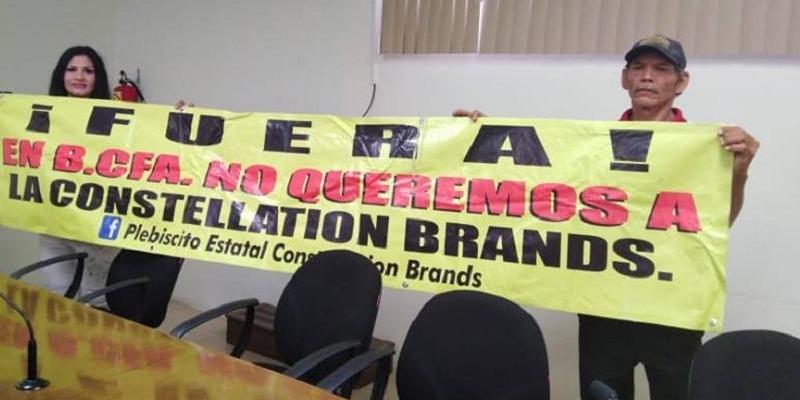 [Note] In a groundbreaking plebicite on March 22, 74% of Mexicali voters voted to halt construction of Constellation Brands brewery, a mega project in an arid region where water resources are under increasing stress and the brewery would have required 20 million cubic meters of water per year.

The reaction of the business community to the recent plebiscite in Mexicali seems astounding. It would be incredible, if it were not for their absolute lack of ethics and dignity during the whole process. As if there was not a long history of popular opposition to the project and an absolute refusal of the political and business classes to consult the scientific and official data that was available for several years. To understand the situation that led to the overwhelming popular decision to reject the project, it is necessary to go back a few years, as well as to carefully examine some of the background

First, the plant in Mexicali was proposed to produce with Mexico’s number one selling beer, Corona, following the sale of the Modelo company to its current owner Anheuser-Busch InBev. Although the agreement was reached in 2008, it deal was not consummated until 2013, because of U.S. Department of Justice objections; approval was granted after Anheuser-Busch agreed to sell all the rights to Modelo’s business in the USA to a third company, Constellation Brands. The agreement stipulated that the beer would have to be exported from Mexico. The US company purchased a brewery, but also had to build its own production facilities for export. Of course, to reduce transportation costs, it was very convenient to build a brewery on the border line.

On its website, Constellation clearly describes this agreement: It acquired the rights to Grupo Modelo's business in the United States of America in 2013 [following the government's demand], including a "state of the art" (that is, automated) plant in Nava, Coahuila, as well as “a perpetual and exclusive license to import, market and sell Corona and other Modelo brands and the freedom to develop extensions of their brands and innovations for the North American market” (https://www.cbrands.com/story/our-heritage?page=10). As part of this expansion, it acquired another brewery in Cd. Obregón in 2016 to supply its most important American market on the west coast.

Second, at the same time, the Governor of Baja California, Francisco (Kiko) Vega de Lamadrid announced his approval of the project to build the plant in Mexicali along with generous state subsidies to encourage the investment (4vientos, 3/2/2017). This political decision was accompanied by a series of permits and official studies that claimed the adequacy of the water supply for the plant as well as for social and productive needs in the region. The strong governmental support provoked a long history of popular uprisings in opposition to the plant, including a lawsuit forcing a plebiscite in 2016 that the State Electoral College declared as "inconsequential and inadmissible." From the very beginning of the project proposal, social mobilizations continued along with administrative and civil society battles.

These confrontations were fueled by countless bureaucratic and academic evaluations of the water systems in the region and the quality of the service offered to the population. It is evident that the Mexicali Public Services Commission continues to be unable to assure adequate residential water service for decades. Likewise, farmers in the Río Colorado Irrigation District and the Mexicali Valley region also do not enjoy a regular supply of the precious liquid. On the other hand, the National Water Commission (based in Mexico City) maintains that there is an adequate supply of water, but its management is poor (as is the case throughout the country!).

Third, in this context it is necessary to reflect on the political and social processes that are taking place these days and their implications for our political system. It is evident that the March 21-22 consultation responded to a long and vigorous citizen demand and that the battle over water in Mexicali is closely related to the national problem of water management. In 2012, Article Four of the Mexico’s Constitution was amended to guarantee the human right to water; since then a heated battle unleashed a profound conflict about the appropriate management paradigm to ensure that this vital liquid is available for the population as well as for the maintenance of the ecosystems from which it comes. This dispute blocked the fulfilment of the constitutional mandate (to be enacted before February 2013!) to promulgate a General Water Law. Since then, the legislatures have postponed this obligation, since the political forces that control much legislative activity have hindered the "Citizen Initiative" that has been brewing for seven years.

As stated above, the heart of the matter is a conflict of paradigms: should water management be allowed to fall into private hands or should a citizen controlled model be promoted? This is not a minor problem: currently, 70% of the volume of water permits is controlled by 2% of the users. Thirty-six million Mexicans have no water in their homes more than three times a week. One consequence of this tragedy is the proliferation of the consumption of bottled waters, both sweetened and 'pure', with deadly health problems. The matter is now on the legislative agenda, with a very intense mobilization of the "political forces" trying to prevent the adoption of the citizen initiative, which reflects a consensus of thousands of local groups spread across the whole country, groups that have worked during years to structure a proposal that guarantees the social interest over the private one.

In Mexicali, we see that the conflict is not just the recent consultation or a blind rejection of the corporate governance model. This beer project has tried to ignore social interest and environmental needs for years. Furthermore, it is the product of the sale of the Mexican brewery's properties to foreign interests for the enrichment, once again, of a very small, privileged group of entrepreneurs at the expense of the strength of the economy and national society. The selection of Mexicali as the location of the plant, from its origin, was due to the power of another group – a political coterie based far from the local scene – that considered it possible to ignore the interests and needs of local society.

It is time to stop deceiving ourselves and continue to allow the petty interests of large and wealthy interests - the water hoarders - to dominate water management in our country. The Citizen Initiative for the General Water Law that is in the Congress of the Union must be promulgated quickly. At the same time, we citizens have to get down to work for its implementation. Without a sustainable water management system, the country will not be in a position to face the social and economic challenges that will arise.