“When I was a little girl we didn’t suffer from water shortages like we do now. Today we are experiencing more droughts, our water sources are drying up and we cannot sit idly by,” Kely Quispe, a small farmer from the community of Huasao, located half an hour from Cuzco, the capital of Peru’s ancient Inca empire, told IPS.

She is one of the 80 members of the Agroecological School of the Flora Tristan Peruvian Women’s Center, a non-governmental institution that has worked for the recovery of water sources through traditional techniques known as seeding and harvesting water in this part of the southern Andean region of Cuzco.

Muñapata, Huasao and Sachac are the three rural Quechua-speaking communities in the province of Quispicanchi, located between 3150 and 3800 meters above sea level, that have so far benefited from the project. The feminist-oriented institution promotes solutions based on nature and community work to address the problem of water scarcity and inadequate water use practices.

“We want to boost water security as well as gender equality because they are two sides of the same coin,” Elena Villanueva told IPS. On Dec. 14 she presented in this city the results of the initiative whose first phase was carried out in 2020 and 2021, with the support of the Basque Development Cooperation Agency and Mugen Gainetik, an international association for cooperation with countries of the developing South also based in Spain’s northern Basque region.

According to the National Water Authority (ANA), Peru is the eighth country in the world in terms of water availability, with a rich hydrodiversity of glaciers, rivers, lakes, lagoons and aquifers. However, various factors such as inefficient management of water and uneven territorial distribution of the population, in addition to climate change, make it impossible to meet consumption demands.

“The lack of water severely affects families in rural areas because they depend on small-scale agriculture for their livelihoods. The melting of glaciers as well as the increase in the frequency and intensity of droughts due to climate change are reducing water availability,” Villanueva explained.

This impact, she said, is not neutral. Because of the gender discrimination and social disadvantages they face, it is rural women who bear the brunt, as their already heavy workload is increased, their health is undermined, and their participation in training and decision-making spaces is further limited. 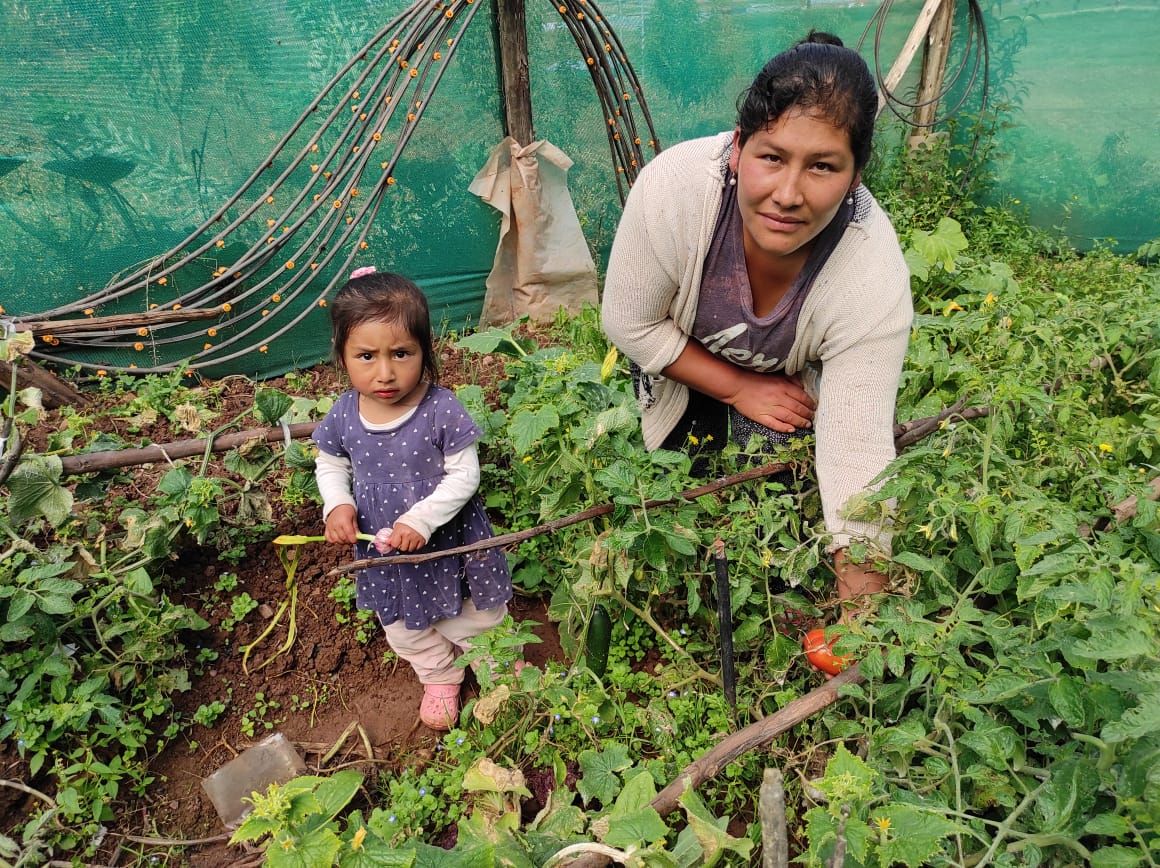 Kely Quispe, a farmer trained at the Flora Tristán Center’s Agroecological School, holds a tomato in her organic garden in the farming community of Huasao. Her vegetable production depends on access to water for irrigation, but climate change has made water more scarce in the Andes highlands region of Cuzco in southern Peru. CREDIT: Janet Nina/IPS

“Moreover, although they are the ones who use water to ensure food, hygiene and health, and to irrigate their crops, they are not part of the decision-making with regard to its management and distribution,” she stressed.

The expert said that precisely in response to demand by the women farmers at the Agroecological School, where they receive technical and rights training, they are focusing on reviving water harvesting techniques used in ancient Peru, while promoting the equal participation of women in rural communities in the process.

She said that approximately 700 families living in poverty, some 3,500 people – about 11 percent of the population of the three communities – will benefit from the works being carried out.

So far, these works are focused on the afforestation of 15 hectares and the construction of six “cochas” – the name for small earthen ponds, in the Quechua language – and an infiltration ditch, as part of a plan that will be expanded with other initiatives over the next two years.

The ditch, which is one kilometer long in 10-meter stretches, 60 centimeters deep and 40 centimeters wide and is located in the upper part of the community, collects rainwater instead of letting it run down the slopes.

The technique allows water to infiltrate slowly in order to feed natural springs, high altitude wetlands or small native prairies, as well as the cochas. 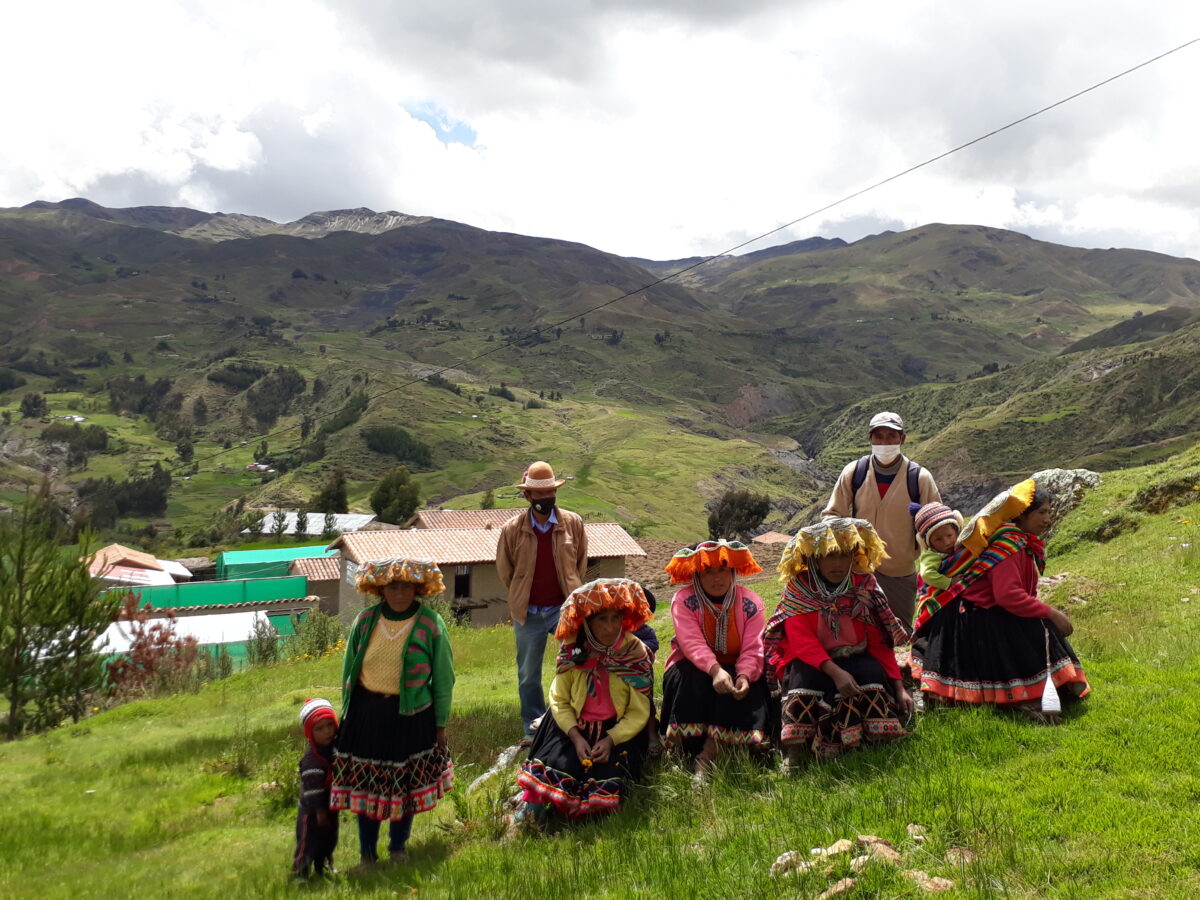 The mayor of the rural community of Sachac, Eugenio Turpo Quispe (right), poses with other leaders of the village of 200 families who will benefit from the forestation works and the construction of small reservoirs and infiltration ditches that will increase the flow of water in this highlands area that is suffering from prolonged droughts due to climate change. CREDIT: Mariela Jara/IPS

In their communal work, villagers use local materials and greenhouse thermal blankets to help retain water. In addition, they have used extracted soil to raise the height of the ditch, to keep rainwater from running over the top.

Although the ditch has been receiving rainwater this month (the rainy season begins in November-December), the ecosystem impact is expected to be more visible in about three years when the cocha ponds have year-round water availability, helping villagers avoid the shortages of the May-October dry season.

Several community members explained to IPS that they will now be able to harvest water from the ditch while at the same time caring for the soil, because heavy rain washes it away and leaves it without nutrients. Some 150 agricultural plots will also benefit from a sprinkler irrigation system, thanks to the project.

Since agriculture is the main livelihood of the families and this activity depends on rainwater, the main impact will be the availability of water during the increasingly prolonged dry periods to irrigate their crops, ensure harvests and avoid hunger, for both villagers and their livestock.

The mayor of the Sachac community, Eugenio Turpo Quispe, told IPS that this is the first time that water seeding and harvesting practices have been carried out in his area. “We had not had the opportunity before; these works have begun thanks to the women who proposed forestation and the construction of cochas and ditches,” he said.

The local leader lamented that due to misinformation, two decades ago they planted pine and eucalyptus in the highlands of his community. “They have dried up our water sources, and when it rains the water disappears, it does not infiltrate. Now we know that out of ten liters of rain that falls on the ground, eight are absorbed by the eucalyptus and only two return to the earth,” he explained during the day that IPS spent in the community. 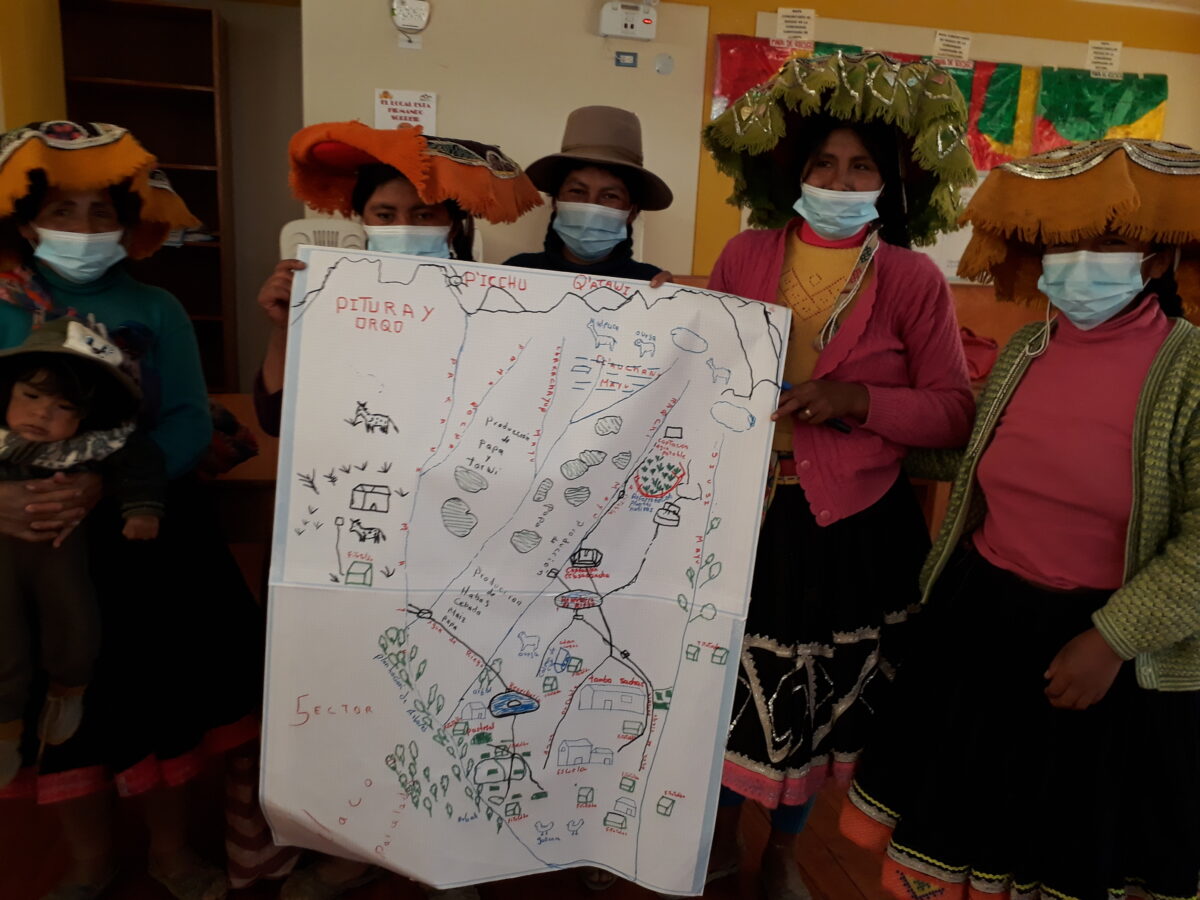 Women farmers from the rural community of Sachac show the map of water sources in their area and the uses for irrigation of their crops, for human consumption and household needs, as well as watering their animals, which they cannot satisfy throughout the year due to the increasingly long and severe dry season. CREDIT: Mariela Jara/IPS

Turpo Quispe said they had seen forestation and construction of cochas and ditches in other communities, but did not know how to replicate them, and that only through the Flora Tristán Center’s project have they been able to implement these solutions to tackle the serious problem of shrinking water sources.

In Sachac, the three techniques have been adopted with the participation of women and men in communal work that began at six in the morning and ended at four in the afternoon. “Side by side we have been planting native plants, digging ditches and hauling stones for the cochas,” the mayor said proudly.

In this community, 9,000 seedlings of queuñas (Polylepis) and chachacomos (Escallonia Resinosas) – tree species that were used in the times of the ancient Inca empire – were planted. “These trees consume only two liters of rainwater and give eight back to Pachamama (Mother Earth),” Turpo Quispe said. As part of the project, the community has built fences to protect crops and has relocated grazing areas for their animals.

“We have planted seedlings and in 10 or 15 years our children and grandchildren will see all our hills green and with living springs so that they do not suffer a lack of water,” the mayor said.

Kely Quispe from the community of Huasao is equally upbeat: “With water we can irrigate our potatoes, corn and vegetables; increase our production to have enough to sell and have extra money; take care of our health and that of the whole family, and prevent the spread of covid.”

“But just as we use water for life, it is also up to us to participate on an equal footing with men in irrigation committees and community councils to decide how it is distributed, conserved and managed,” she added. 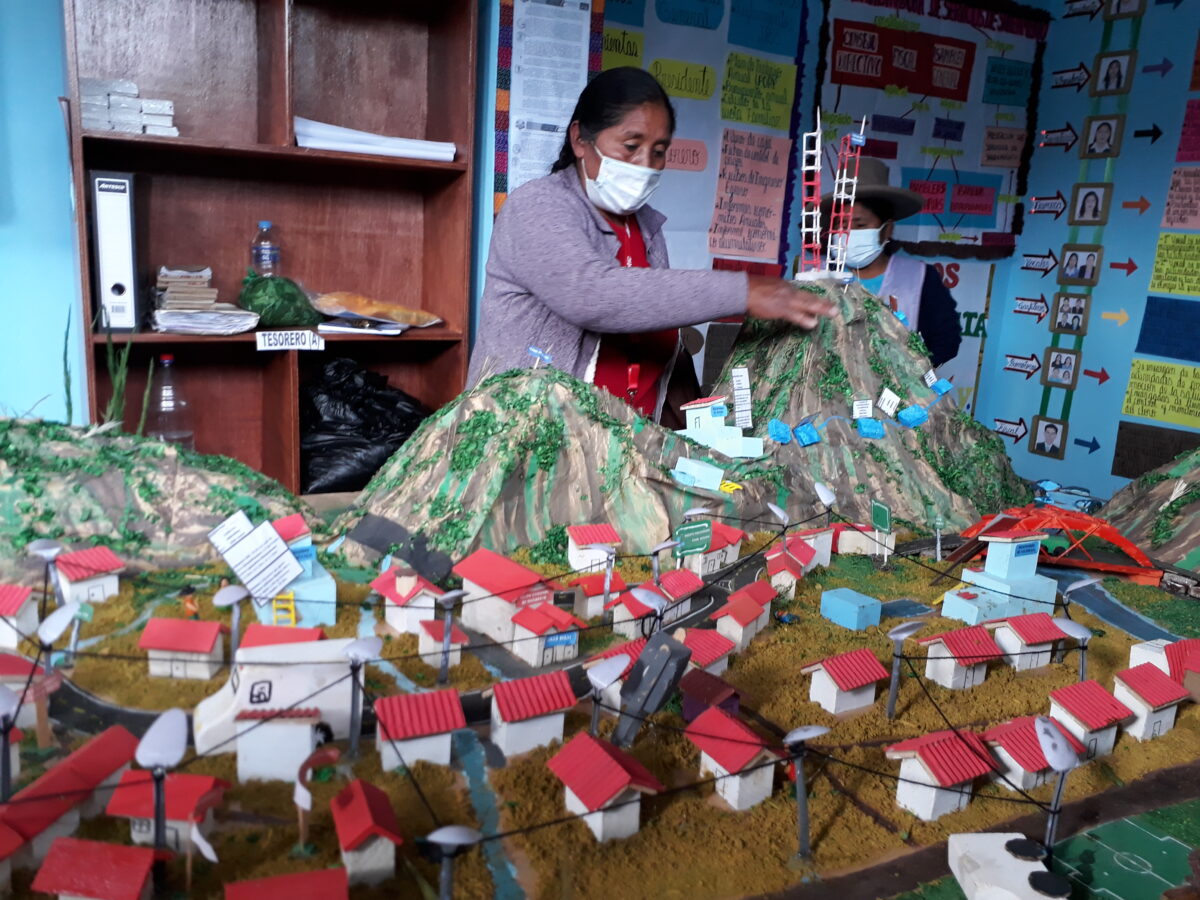 A model shows the water sources in the rural community of Muñapata in the Cuzco region, in Peru’s southern highlands. It was made by local women and men who built a system based on ancestral techniques for the collection and management of water, as increasing drought threatens their lives and crops. CREDIT: Mariela Jara/IPS

The decade of water security

Villanueva of the Flora Tristán Center said it was important for the country’s local and regional authorities to commit to guaranteeing water security in rural areas within the framework of the Sustainable Development Goals (SDGs).

The International Decade for Action: Water for Sustainable Development was declared for 2018-2028 by the United Nations and SDG6 is dedicated to water and sanitation, to ensure universal and equitable access for all, protect and restore water-related ecosystems, and support the participation of local communities in improving management and sanitation.

“At the national level, public policies aimed at seeding and harvesting water should be strengthened because they revive the communities’ ancestral knowledge, involving sustainable practices with low environmental impact that contribute to guaranteeing the food security of families,” she said.

However, Villanueva remarked, in order to achieve their objectives, these measures must not only promote equal participation of men and women, but must also be accompanied by actions to close the gender gap in education, access to resources, training and violence that hinder the participation and development of rural women.