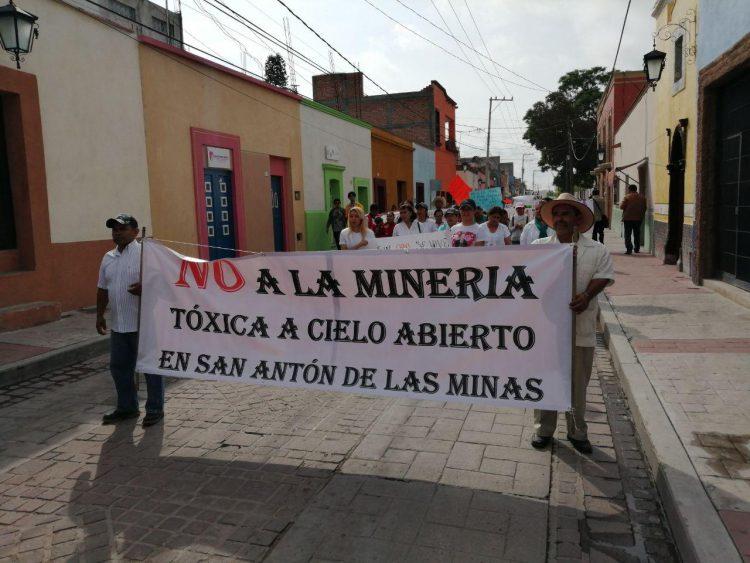 Dolores Hidalgo, Gto. Last night, organizations and civil associations that have been fighting against the exploitation of the Cerro del Gallo Mine in the San Anton de las Minas community in Dolores Hidalgo, announced that the resolutions regarding the permits for the exploitation of the mine and change of land use that the Canadian mining company Argonaut Gold needed to obtain from the Ministry of Environment and Natural Resources--Semarnat--were denied.

But the activists believe that while this resolution is positive for their struggle, they will continue various actions with more determination, organization and strategies, since the decision can be appealed by Argonaut Gold.

The organizations, Coalition for the Defense of the Independence Basin (CODECIN), the Center for Agricultural Development (CEDESA), and the Young Guardians of the Watershed who staged several protests against this mining project during the past year, indicated that the determination of the SEMARNAT at the federal level is beneficial in that the 70-page document can be read publicly on the website of the agency, in which the various consequences of the exploitation of the already damaged aquifer of the Independence watershed would have in the first place, as well as the severe damage to the environment by the leaching methods which the mining company planned to use.

For this reason they plan to continue in struggle because they have determined that there are still areas, not necessarily directly related to the mining project, where the various authorities should continue to be pressured. They stressed that even yesterday they were working in one of the central streets of the city creating a mural rejecting the mining company where even the mayor, Miguel Angel Rayas Ortiz, was participating at a certain moment in its creation.

“We will continue to carry out various activities during this year, it is necessary to remain united and continue to grow. We need the population to know that a battle has been won but not war, because the opposition to this project must continue, we need each and every one of the inhabitants of this municipality to remain firm to ‘No to the Mine’” they concluded.

On the other hand, organizations such as the Mexican Network of those Affected by Mining (REMA), Collective Environmental Action and the Brotherhood of the Watershed pointed to the positive aspects of this resolution, especially because it alleviates the continued depletion of the important Independence aquifer that seven municipalities in the northern part of the state depend on for their daily water supply.

“Even with this resolution we should not lower our guard, the fight must continue and be attentive to the fact that at any moment the Canadian company Argonaut Gold could appeal this resolution or, what is more, they can use the water from the concessions that they have acquired, or begin superficial operations even without permission,” they said.

While noting that this resolution is, above all, a collective triumph of the inhabitants of the more than 20 communities surrounding Cerro del Gallo, the organizations and activists who have undertaken this struggle, said that they still need continuous action.