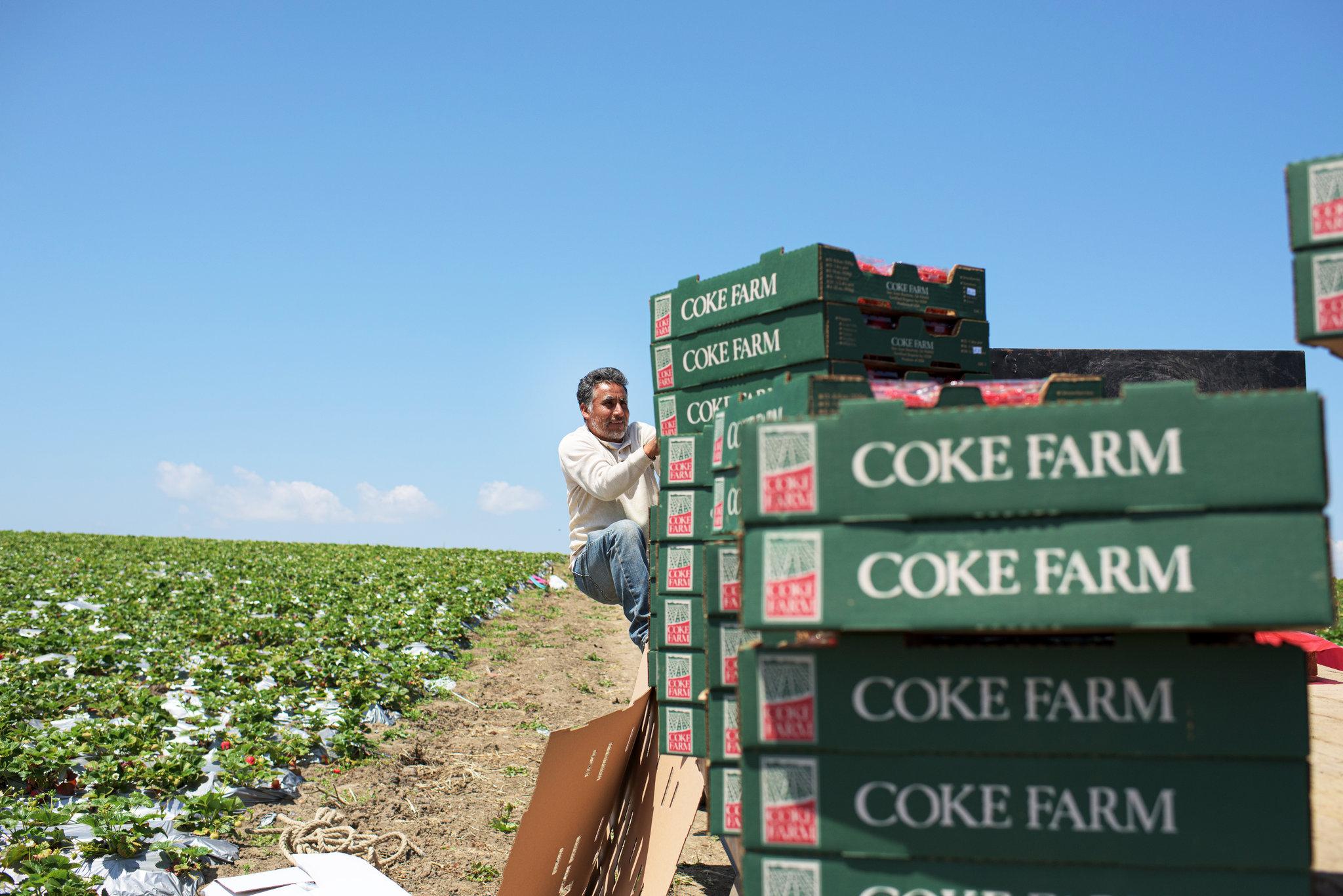 In California, near immense industrial farms, small plots are rented out to field laborers so they can try to create their own farm businesses.

SALINAS, Calif. — The Salinas Valley is known for its enormous industrial farms that grow produce like lettuce and broccoli. But just southeast of the city of Salinas, a patchwork of much smaller organic fruit and vegetable fields breaks the industrial sprawl.

Start-up farmers tend these fields morning, afternoon and night. When the sun sets, they pull out headlamps and cellphones to illuminate their rows of crops.

Reyna Manriquez is one of those farmers. The 24-year-old manages three-quarters of an acre here — her very first farm. She arrives in the late afternoon after harvesting strawberries for an agriculture company nearby.

Ms. Manriquez is a recent graduate of the Agriculture and Land-Based Training Association, referred to here as Alba, which trains aspiring farmers and rents this land to them for as little as $130 per quarter acre per year.

David Leonhardt helps you make sense of the news — and offers reading suggestions from around the web — with commentary every weekday morning.

“I’ve learned a lot here that I never would have known,” said Ms. Manriquez, who sells bunches of fava beans and crates of mixed vegetables through her farm’s Facebook page. “If I had just stayed picking strawberries, the only thing I’d know how to do is pick strawberries.”

Alba is an incubator farm: a newer form of farmer training program that leases land to aspiring farmers at affordable rental rates. Some of these programs also connect farmers with business training. Nearly 200 such incubators have popped up throughout the United States in recent decades, according to the New Entry Sustainable Farming Project at Tufts University. 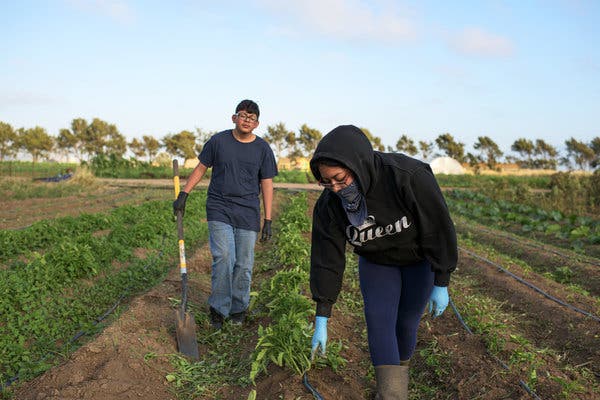 Reyna Manriquez and her little brother weeding a row of crops at the Alba incubator farm. Credit...Johnny Magdaleno

Data is limited, but Tufts University surveys show that 40 to 60 percent of participants are still farming after they graduate these programs. Alba reports a similar success rate. “When I talk about incubator farms or any training programs, they’re on the shelf with other successful models,” said Juli Obudzinski, the interim policy director at the National Sustainable Agriculture Coalition, referring to Alba. “They’re doing something right.”

Starting a business in any industry is challenging. Bigger companies dominate, equipment is expensive, prices swing wildly. But farmers also have to worry about crop diseases and extreme weather events like droughts and floods. That cocktail is what makes agriculture such a demanding industry, and partly explains why farmers and farmland are on the decline across the country.

According to the Agriculture Department’s most recent agriculture census, total farmland in the United States shrank by 21.9 million acres between 2007 and 2017. There are also 162,572 fewer farms than there were in 2007. Lori Sallet, the media relations director at the American Farmland Trust, said that urban expansion and the opportunity it presents for farmland owners to make real estate deals with developers drive this decline.

On the positive side, other Agriculture Department data says that more than a quarter of American farmers are beginners who started between 2007 and 2017. But newer farmers usually struggle to acquire the quality land and machinery that are within reach of industrial farmers or heritage farming families with big harvests and well-established businesses.

Alba and other incubator farms try to bridge that gap. They connect beginning farmers with these resources on affordable terms so they can see whether they actually like farming before committing to it as a career.

Alba trainees “go through a training course that is very thorough and will prepare them for what it’s like to be out in a competitive farming environment,” said Vivian Soffa, the executive director at the Agriculture Department’s branch in Monterey County, Calif. After they graduate, Alba puts them in touch with peer organizations that help them fine-tune their business plans and find financing for farm real estate.

“I don’t like to see people lose their entire life savings because they want to become a farmer, and this program really helps with that,” Ms. Soffa said.

Alba students begin by applying for the program’s ten-month training course, which teaches everything from business management, to meeting organic standards, to marketing. Tuition is based on the student’s income and the number of dependents he or she cares for; the unsubsidized cost is $2,400, but most attendees pay about $300 for the entire course.

Graduates of the training course are then invited to pitch their farm idea to a selection committee for the incubator. If you demonstrate the grit needed to make a living out in the fields, you’re granted a yearlong lease — usually to rent a half-acre at first — on Alba’s 100-acre property.

The market rental rate of Alba’s land is about $2,100 per acre per year, but first-year students pay 25 percent of that rate. From there, farmers get bumped up to larger plots based on their performance. With each bump comes a rise in rent. Those who make it through the roughly four year long incubator usually end with a little under four acres to their name, renting at 85 percent of the market value.

“In talking to beginning farmers and anyone working in the field, land access always comes up as one of the most challenging pieces,” said Ms. Obudzinski. “The incubator approach is pretty unique in that it takes that off the table and provides farmers access, albeit for a short period of time.”

Many of Alba’s students are Latinos who followed their families, or traveled on their own, to California to work in the state’s multibillion dollar agricultural industry. About 70 percent are immigrants. “From our perspective, farmworkers are a great group to recruit from for the next generation of farmers,” said Nathan Harkleroad, a program director at Alba. “They grew up around it and know the work that goes into it.”

An Alba student, Ramiro Cenobio, and his brother Juan Carlos used to tend their father’s small farm in Oaxaca, Mexico, when they were younger. Years later, Ramiro left a job picking strawberries in California and applied for Alba. The brothers now work on building up Cenobio Organics, their first farm business, where they’re growing cilantro, tomatoes, carrots and strawberries.

Mr. Cenobio only makes about as much as he did when he was a field worker, but he said the jump to become an entrepreneur was worth it. “I prefer being focused on something that I’m creating myself than to be working for another company,” said Mr. Cenobio, who is looking forward to graduating from Alba in the coming year.

In a 2018 survey of 104 alumni who had graduated from the business training course over the past two decades, 49 still had active farm businesses. Sixteen of those were running their businesses from Alba’s incubator farm while 33 had moved on to land outside the incubator. All together they employ a total of 175 people and generate about $5 million annually in sales.

Most of those who didn’t choose to open a farm outside Alba reported increases in their income after graduating and returning to jobs in agriculture and other industries.

Ana Melissa Garcia was running a bakery when she found out about Alba. She said farmers in the program’s incubator were among the few purveyors of organic produce in the Salinas area. She sold her bakery, applied to Alba and started farming alongside them.

There, she built up a farm business selling edible flowers and herbs to restaurateurs in San Francisco. That enterprise was bought by another farm, but her experience at Alba helped her advance into supervisory roles at nearby produce companies.

Today she manages organic broccoli farmers in Mexico. “I came a long way,” she said. “They taught me a lot — not just how to grow, but the business part.”

A 2016 study by the University of California at Berkeley’s Department of Environmental Science, Policy, and Management notes that even those Alba graduates that do find plots of land nearby still face many barriers. Among them are short-term or insecure rental agreements that discourage long-term planting, and a lack of access to financing and legal advice.

Jennifer Hashley, the director of the New Entry Sustainable Farming Project at Tufts University, says incubator programs throughout the country are grappling with these issues. They’re exploring ways to connect graduates with networks of partners that can address land and capital needs as their businesses advance.

Incubators aren’t the only programs that can prepare new farmers for the industry, Ms. Obudzinski said. Since 2008, the Department of Agriculture’s Beginning Farmer and Rancher Development Program, the largest funding source for farmer training assistance in the country, has invested over $160 million in an array of mentorship and training programs.

Many of those don’t lease land to start farm businesses. “I think it is one tool, but it certainly isn’t the only way,” Ms. Obudzinski, from the National Sustainable Agriculture Coalition, said.

Yet Alba graduates and current students say the program matters, even if securing land afterward isn’t a guarantee. “Alba gets you started,” said Javier Zamora, who launched his company, JSM Organic Farms, with Alba’s support.

Mr. Zamora, an immigrant from the Mexican state of Michoacán, now leases 44 acres of farmland along the southern edge of Silicon Valley. He’s one of a handful of immigrant farm entrepreneurs who have graduated Alba in recent years and gone on to acquire land with help from California FarmLink — a financial institution that has provided $5.2 million in loans to Alba graduates.

Acevedo Organic Farm, Silva Organic Farms and Chelito Organics leased their first shared 60 acres south of Silicon Valley in 2018 and are being supported by operating loans through FarmLink. La Granjita Orgánica, started by a former farmworker, Victor Cortes, and his wife Veronica Ceja in 2014, also used FarmLink debt to purchase its first 11 acres nearby last year.

“I think that if we don’t do more things like what Alba has done, preserving some land to stay in agriculture or allowing future generations to have agricultural land to farm, your kids and their grandkids will face very serious issues accessing local food,” said Mr. Zamora, who is now an Alba board member.

That’s what drew Ms. Manriquez, the recent graduate, to apply. Her business, La Key Farms, is a passion project for now — a few long rows of crop lines that her boyfriend and little brother help weed in the dusk.

But if it picks up steam she’ll launch it outside the incubator as a small, community-focused farm, selling produce herself and leaving her strawberry-picking days in the past.

Johnny Magdaleno is a journalist and photographer who focuses on human rights and the environment.