Where Do the 2020 Presidential Candidates Stand on GMOs? 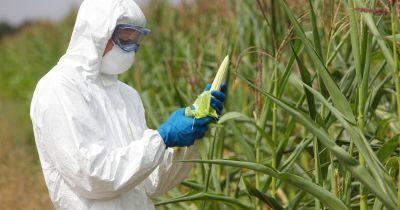 About half of all American adults have one or more preventable, chronic, diet-related diseases.

Whether it’s factory-farm foods from animals raised on GMO feed, or sugary foods and drinks made with GMO sweeteners or foods fried in GMO fats, nearly all the foods making Americans fat and sick contain genetically engineered ingredients. This is how genetic engineers are “feeding the world,” as they like to say.

But what the genetic engineering industry is really interested in is how many billions of dollars they can make selling pesticides.

Fact: Genetic engineering has been used almost exclusively as a means to sell pesticides, especially the carcinogenic glyphosate-based Roundup herbicide that Monsanto created its genetically engineered crops to withstand. Today, 99 percent of GMOs grown around the world are engineered to withstand massive applications of glyphosate, an herbicide classified as “probably carcinogenic to humans” the World Health Organization’s International Agency for Research on Cancer.

There’s no reason our food should be produced from crops that are genetically engineered to be soaked in carcinogens.

More than 14,000 certified organic farms and 3,900 producers finishing grassfed cattle in the U.S. today are proving that another food system is possible.

And they’re doing it with virtually no federal assistance compared with the massive subsidies lavished on the producers of GMO crops and factory farm animal products.

Through a Green New Deal, we could turn this situation around by supporting family farmers; by investing in regenerative organic farming and land use practices that sequester carbon; and by building a food system that ensures universal access to healthy food.

We’ve investigated each of the 2020 Presidential candidates to learn where they stand on GMOs by looking into who is funding their campaigns, what their records are as elected officials and what the candidates have said in their platforms and public statements.

We know where several of the Presidential candidates stand on GMOs because they were in the House or Senate in 2016. That was the year Congress removed labels from genetically engineered foods by passing a federal bill that took away states’ rights to label GMOs and instituted a federal “bioengineered disclosure” standard that has yet to result in any GMOs being labeled.

We’ve combed through data compiled by FEC.gov and OpenSecrets.org to find out who’s taken campaign contributions from the biggest companies in the food system, including the four multinational corporations, Bayer-Monsanto, Syngenta, BASF, and DowDuPont (now Corteva). These four companies control 75 percent of GMO plant breeding research, 60 percent of the commercial GMO seed market and 76 percent of pesticide sales globally.

Here’s what we know about where each of the presidential candidates stand on GMOs. We’ve listed every candidate currently in the race, beginning with the incumbent and his Republic challengers, followed by the Democratic hopefuls, in alphabetical order.

Our exhaustive research wasn’t able to uncover everything we’d like to know about every candidate. To learn how you can help get every presidential candidate on record, join Citizens Regeneration Lobby.

As President, Trump also issued an executive order to exempt GMOs from federal regulations. GMOs aren’t safety tested, labeled or monitored for impacts on human health or the environment. But GMOs are currently regulated by the U.S. Department of Agriculture’s Animal and Plant Health Inspection Service as potential plant pests when they are herbicide-tolerant crops, by the U.S. Environmental Protection Agency when they are crops or organisms that produce pesticides and by the U.S. Food & Drug Administration as “new animal drugs” when they are genetically engineered animals.

It’s not much, but these regulations have done two important things: 1) alerted the public to the existence of new GMOs; and 2) provided an opportunity for public comment before new GMOs enter our food system. Trump’s executive order threatens to wipe away our right to know if GMOs even exist! If that were to happen, companies like Monsanto could create new GMOs and release them into the environment and our food system without notifying anyone. The consequences could be disastrous and irreversible and it would be even more difficult than it is now to figure out what impact GMOs are having on our health.

Joe Walsh, when he was a Congressman, counted among his top contributors McDonald’s, a company with a huge carbon footprint (29 percent from factory farmed beef) that makes its money from child obesity and animal cruelty.

Bill Weld, former Governor of Massachusetts, between 2007 – 2011 worked as a registered lobbyist for international law firm McDermott, Will & Emery. He’s listed on reports for defense contractor Raytheon, CNX Gas Corporation, Sony Electronics and shoemaker New Balance. Weld is currently a member of lobbying firm ML Strategies. Weld is a corporate lobbyist, but there is no evidence that he has worked for Big Ag.

Michael Bennet, as a Senator, has taken money from the political action committees of BASF, Bayer, DowDuPont, Syngenta and CropLife (the GMO/pesticide companies’ trade association). His voting record reflects these campaign contributions. He voted for the 2016 Bioengineered Food Disclosure Law, which took away states’ rights to label GMOs but has yet to result in any federally required labels on genetically engineered food.

Joe Biden’s presidential campaign has taken campaign contributions from Erik Fyrwald, CEO of Syngenta, a Chinese-owned manufacturer of neonicotinoid pesticides blamed for the insect apocalypse hitting bees, butterflies and other pollinators. While in Congress, Biden never had the opportunity to vote on GMOs, but he made his views clear by refusing to cosponsor any of bills introduced by colleague Dennis Kucinich that would have required safety testing, labeling and contamination prevention for GMOs.

Mike Bloomberg, a billionaire businessman, has not made his views on genetic engineering known. In 2011, while he was Mayor of New York City, his Department of Health’s report on city pesticide use revealed that Monsanto’s glyphosate-based Roundup weed-killer was the city’s most heavily used liquid herbicide, but Bloomberg made no effort to reduce its use. [New York City is currently considering a bill that would make all of its parks pesticide-free.] That said, Bloomberg is a well-known anti-obesity crusader who has taken on the soda industry. Nearly all sodas are made with high-fructose corn syrup made from GMO corn, though his campaigns have never mentioned this.

John Delaney, as a Congressman, voted for the 2016 Bioengineered Food Disclosure Law, which took away states’ rights to label GMOs but has yet to result in any labels on genetically engineered food.

Tulsi Gabbard, a Congresswoman from Hawaii where GMOs and related pesticides are field tested with disastrous consequences, has always been very vocal in her calls for common sense regulations of this industry, including labels on genetically engineered food.

Amy Klobuchar, as a Senator, has taken money from the political action committees of BASF, Bayer, DowDuPont, Monsanto, Syngenta and CropLife (the GMO/pesticide companies’ trade association). Her voting record reflects these campaign contributions. She voted for the 2016 Bioengineered Food Disclosure Law, which took away states’ rights to label GMOs but has yet to result in any federally required labels on genetically engineered food.

Deval Patrick has not made his views on genetic engineering known. He is a former governor of Massachusetts and a current executive at the investment firm Bain Capital. In his early career, he was a lawyer for the NAACP, but was later recruited to serve as general counsel for Texaco, a corporation he was monitoring for racial discrimination. He has also been corporate counsel to Coca-Cola, a company that has lobbied government regulators to shift the blame for obesity away from its GMO high-fructose-corn-syrup-sweetened beverages.

Bernie Sanders, a Senator from Vermont, the first state to require labels on genetically engineered food, has been one of Congress’s top advocates for GMO labels, forcing a floor vote on states’ rights to label GMOs in 2013, and fighting until the very end to prevent passage of the 2016 Bioengineered Food Disclosure Law, which took away states’ rights to label GMOs but has yet to result in any federally required labels on genetically engineered food.

Tom Steyer, a billionaire businessman, has not made his views on genetic engineering known. In 2018, his tweet celebrating the first Roundup-exposed cancer victim’s win against Bayer/Monsanto, was met with jeers raising the fact that his hedge fund Farallon Capital Management had $776 million invested in Monsanto.

Elizabeth Warren, as a Senator, has flip-flopped on GMO labeling. She voted against the 2013 Sanders amendment for states’ rights to label GMOs. She then supported a Food and Drug Administration guidance on voluntary GMO labels.  Finally, she voted against the 2016 Bioengineered Food Disclosure Law, which took away states’ rights to label GMOs but has yet to result in any federally required labels on genetically engineered food.

Andrew Yang, an attorney and entrepreneur, has not made his views on genetic engineering known.

Editor’s note: This information was compiled by Citizens Regeneration Lobby (CRL), the 501(c)(4) sister organization of Organic Consumers Association. CRL can endorse candidates and engage in political advocacy that is out-of-bounds for 501(c)(3) organizations. We can’t share CRL’s endorsements with you here. If you’d like to receive that information from CRL via email, please join CRL here.

Alexis Baden-Mayer is political director of the Organic Consumers Association (OCA). To keep up with OCA news and alerts, sign up for our newsletter.