Is Your Decaf Coffee Organic? If Not, It May Contain a Chemical So Toxic the EPA Banned It from Paint Removers 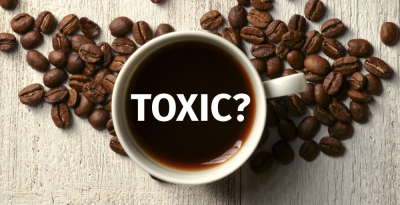 About a year ago, the U.S. Environmental Protection Agency (EPA) made it official: Consumers can no longer buy paint removers containing methylene chloride, a chemical linked to cancer, cognitive impairment and other health issues. (In a controversial move, the agency stopped short of banning the chemical for commercial/industrial use).

EPA Administrator Andrew Wheeler, in a statement issued November 22, 2019, said the “EPA’s action keeps paint and coating removers that contain the chemical methylene chloride out of consumers’ hands” in a “step that will provide important public health protections for consumers.”

Methylene chloride must be pretty bad for the EPA to ban it. After all, the agency refuses to ban chlorpyrifos, a known neurotoxin especially harmful to children, and glyphosate, the chemical in Monsanto’s Roundup weedkiller deemed a “probable human carcinogen” by the World Health Organization.

Walmart and Amazon aren’t alone. According to a recent investigation by the Clean Label Project™, a national nonprofit focused on health and transparency in labeling, a surprising number of popular decaffeinated coffee brands contain methylene chloride.

That’s troubling news, given that many of the people who choose decaf over caffeinated coffee do so for health reasons. For instance, doctors often suggest pregnant women and people suffering from heart disease stick with decaf.

The study contained some good news, though, for consumers who buy organic—none of the certified organic brands tested by Clean Label Project contained detectable levels of methylene chloride.

“It was reassuring to find that 100% of certified organic decaffeinated coffees tested were non-detect for methylene chloride, the active ingredient in paint stripper,” said Jaclyn Bowwn, Clean Label Project executive director. “Since the primary consumers of decaffeinated coffee are sensitive populations like pregnant women and people suffering from heart disease, do your research, demand answers from brands, and reach for organic when it comes to choosing decaffeinated coffee."

What is methylene chloride and how does it end up in decaf coffee?

Methylene chloride, or dichloromethane, is a colorless, nonflammable and volatile liquid chlorinated hydrocarbon, a group of chemicals composed of carbon, chlorine and hydrogen. It’s commonly used as a solvent in paint removers, a solvent in the manufacture of pharmaceuticals and as a degreasing and blowing agent for industrial use.

You’ll also find it in some decaf coffee brands, the ones that still use the chemical in their decaffeination process.

As the Clean Label Project report explains, all coffee beans contain caffeine. To create decaf coffee, the green or roasted beans are moistened, to make the caffeine soluble so that it can be drawn out. The coffee is decaffeinated at moderate temperatures, typically ranging from 70 to 100 degrees Celsius (160 to 210 degrees Fahrenheit).

There are two primary types of decaffeination processes: non-solvent and solvent-based. The non-solvent type uses water, and relies on time and temperature to draw out the caffeine. The solvent-based process uses either methylene chloride or ethyl acetate.

According to Consumer Reports, German coffee merchant Ludwig Roselius discovered decaf by accident in the 1900s, after a shipment of coffee beans was soaked in seawater during transit, naturally extracting some of the caffeine. A few years later, Roselius patented the first commercially successful means of decaffeinating coffee. But instead of just salt water, his method also used a more potent chemical solvent called benzene, which has been linked to cancer, blood disorders, and fetal development issues in pregnant women.

Who drinks decaf and why shouldn’t they avoid brands with methylene chloride?

After benzene was determined to be too toxic, decaf coffeemakers turned to methylene chloride. But is it any safer? Especially considering who typically drinks decaf coffee?

Americans love their coffee—about 83 percent of us drink it, including the 64 percent who drink it everyday.

The majority of us drink coffee because it contains caffeine. But a percentage of people—including heart patients and pregnant women—drink decaf because they believe it’s healthier for them.

The Clean Label Project cites a study by the American College of Cardiology that suggests some heart patients should either limit their intake, or abstain completely from drinking anything with caffeine.

The report also cites research by the American Pregnancy Association suggesting that pregnant women should forego caffeine for two reasons:

First, since caffeine is a stimulant, it increases blood pressure and heart rate, both of which are not recommended during pregnancy. Second, caffeine crosses the placenta to the baby. Although the mother may be able to handle the amounts of caffeine, a baby’s metabolism is still maturing and may not be able to fully metabolize the caffeine. Overall, due to conflicting conclusions from numerous studies, the March of Dimes states that until more conclusive studies are done, pregnant women should limit caffeine intake.

But is it wise, especially for heart patients and pregnant women, to replace caffeinated coffee with decaf—if the decaf brand you’re drinking contains a chemical linked to cancer, cognitive impairment and asphyxiation, and is also associated with liver, kidney and reproductive toxicity?

According to Clean Label Project, in 1985, the U.S. Food & Drug Administration (FDA) concluded that methylene chloride is carcinogenic to animals when inhaled, and may be carcinogenic to humans. The agency banned the chemical from cosmetics, but allowed it in decaf coffee because the amounts were “extremely low.”

The FDA hasn’t re-evaluated the levels of methylene chloride in decaffeinated coffee in 35 years. Some of the products tested by the Clean Label Project exceeded the FDA’s 35-year-old data.

What did the Clean Label Project investigation find?

The Clean Label Project selected and purchased off the store shelf or online 23 of the top-selling decaffeinated coffee products according to the Amazon.com best-seller list. Each of the products were sent to an independent lab and tested for contaminants.

The 15 products that tested for undetectable levels are:

The 4 products that tested for detectable levels of methylene chloride at a rate of 50-89 parts per billion were:

The 6 decaffeinated coffee products had detectable levels of methylene chloride above 90 parts per billion were:

Based on the Clean Label Project study, consumers who want to avoid methylene chloride in their coffee should look for certified organic brands. The Fair World Project (a project of Organic Consumers Association) lists organic and fair trade brands here.

In addition to seeking out the certified organic label, consumers can also look for claims on product packaging such as solvent-free, chemical-free or Swiss-water. These decaffeination processes don’t use harsh chemicals like methylene chloride.

Katherine Paul is associate director of the Organic Consumers Association (OCA). To keep up with OCA news and alerts, sign up for our newsletter.